Dynamo Dresden face off with visiting club Erzgebirge Aue at Rudolf-Harbig-Stadion in the Bundesliga 2 game on Sunday.

Our tips, poll and stats for Dynamo Dresden v Erzgebirge Aue can all be found here including the latest game odds.

Dynamo Dresden will be looking to improve on their last outing here following the 0-1 Bundesliga 2 losing effort in their last game against Erzgebirge Aue.

Their past results show that Dynamo Dresden:

A sequence of pretty poor displays from the Erzgebirge Aue defence has resulted in a sum of 18 goals being surrendered by them in only their last six outings. They will certainly want to improve on this unimpressive component of their game. Let’s find out if that trend will end up being continued on into this next match.

Going into this contest, Erzgebirge Aue have not emerged victorious against Dynamo Dresden when having played them away from home in the previous 3 league matches.

Inspecting their past head-to-head meetings dating back to 06/05/2018 shows us that Dynamo Dresden have won 3 of them and Erzgebirge Aue 1, with the number of drawn results standing at 2.

A sum of 15 goals were scored between the two sides in this period, with 8 of them for Dresden and 7 created by Aue. That’s an average goals per game of 2.5.

The last league fixture between the two was Bundesliga 2 match day 17 on 12/12/2021 which ended up with the score at Erzgebirge Aue 0-1 Dynamo Dresden.

On that day, Erzgebirge Aue managed 47% possession and 18 shots at goal with 8 of them on target.

Dynamo Dresden got 11 attempts on goal with 4 on target. Ransford Königdörffer (61') scored.

It certainly seems that Erzgebirge Aue could really find it hard to find the back of the net against a Dynamo Dresden side who have the capability to win well here.

Our tip is for a convincing 3-0 winning margin for Dynamo Dresden at full-time. 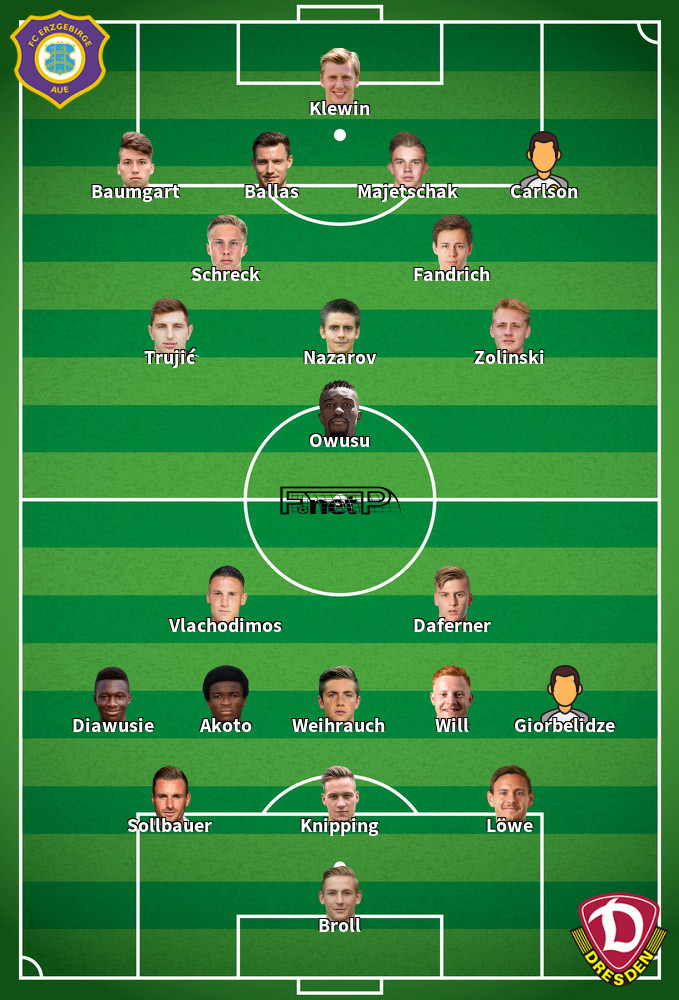 Normally taking up the Striker position, Ransford Königdörffer was born in Berlin, Germany. Having made a first senior appearance for Dynamo Dresden in the 2019 - 2020 season, the talented Forward has managed 5 league goals in this 2. Bundesliga 2021 - 2022 campaign so far in a total of 30 appearances.

We have made these Dynamo Dresden v Erzgebirge Aue predictions for this match preview with the best intentions, but no profits are guaranteed. Please always gamble responsibly, only with money that you can afford to lose. Good luck if you do place a bet today.