Dynamo Dresden will be facing visiting opponents Hamburg at Rudolf-Harbig-Stadion in the Bundesliga 2 meeting on Friday.

Dynamo Dresden will be looking for an improved result here after the 3-0 Bundesliga 2 loss in their previous game against Ingolstadt.

In that match, Dynamo Dresden managed 72% possession and 5 attempts on goal with 1 on target. The only player on the scoresheet for Dynamo Dresden was Kevin Ehlers (17' Own goal). At the other end, FC Ingolstadt 04 got 13 shots at goal with 5 on target. Nico Antonitsch (1') and Filip Bilbija (85') scored for Ingolstadt.

Alexander Schmidt's Dynamo Dresden have scored 7 times in their last 6 outings. The corresponding tally of goals that have been scored against them in those games stands at 9.

Coming into this clash, Dynamo Dresden are undefeated in their last 2 home league matches.

In their previous game, Hamburg drew 1-1 in the Bundesliga 2 tie with Schalke.

In that game, Hamburg had 50% possession and 8 shots on goal with 3 of them on target. The only player to score for Hamburg was Robert Glatzel (2'). For their opponents, FC Schalke 04 got 29 shots at goal with 5 on target. Ko Itakura (87') was the scorer for Schalke.

A sequence of steadfast showings by the Hamburg defenders has resulted in the number of goals they’ve conceded amounting to 4 from their previous 6 fixtures in total. Over that same time, their forwards have scored 12. That trend might not be carried forward into this next game, though.

Heading into this contest, Hamburg are without an away win for the past 2 matches in the league.

A review of their prior head to head meetings going back to 18/09/2018 shows that Dynamo Dresden have won 1 of these games & Hamburg 4, with the number of draws standing at 1.

A combined sum of 13 goals were produced between them during those clashes, with 6 for Dresden and 7 coming from Hamburg. That is an average goals per game value of 2.17.

The last league clash between these sides was Bundesliga 2 match day 2 on 01/08/2021 which finished with the scoreline of Hamburg 1-1 Dynamo Dresden.

That day, Hamburg had 66% possession and 16 shots on goal with 8 on target. Their only player on the scoresheet was Ludovit Reis (5').

On the other side, Dynamo Dresden had 8 attempts on goal with 3 on target. Tim Knipping (68') scored.

In our view, Dynamo Dresden should have enough to put a goal past this Hamburg lineup, however a single goal isn’t likely to be as many as they will have scored against them.

Our selection here is for both teams to score in a 1-2 victory for Hamburg at the end of this one. There shouldn’t be much in it, either way. 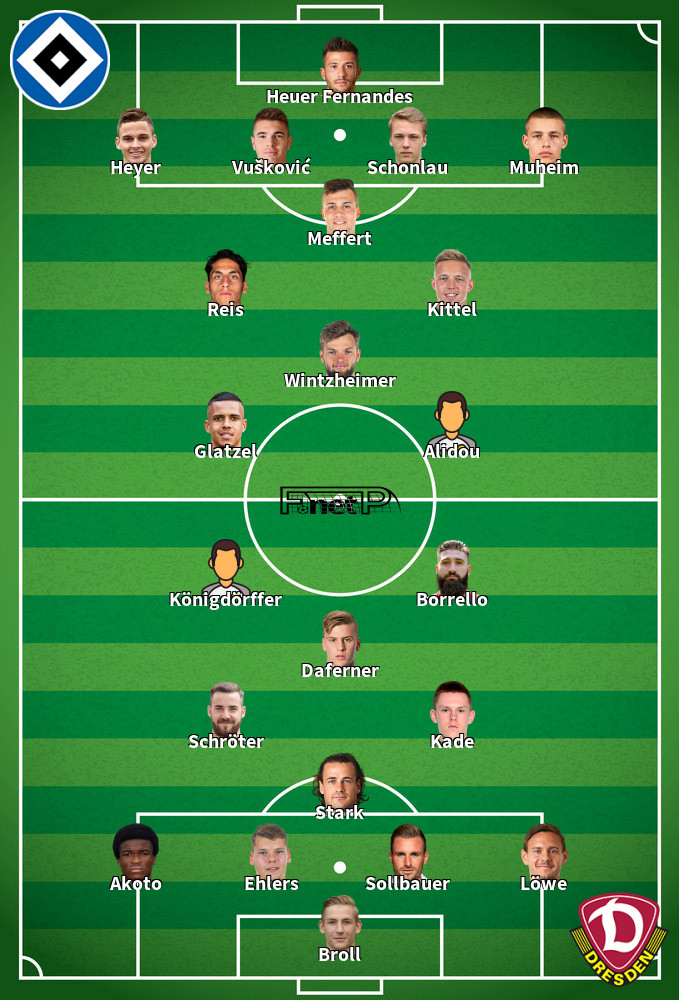 Normally played in the Striker position, Ransford Königdörffer was born in Berlin, Germany. After making a first senior appearance for Dynamo Dresden in the 2019 - 2020 season, the skilful Forward has managed 3 league goals in the 2. Bundesliga 2021 - 2022 campaign to date from a total of 17 appearances.

We have made these Dynamo Dresden v Hamburg predictions for this match preview with the best intentions, but no profits are guaranteed. Please always gamble responsibly, only with money that you can afford to lose. We wish you the best of luck.