The Bundesliga 2 match at Erzgebirgsstadion on Friday will see home side Erzgebirge Aue go into battle with opponents Hamburg.

Our Erzgebirge Aue v Hamburg tips, poll and stats can be seen in full below (including the best match odds).

Erzgebirge Aue will be looking for an improved result here after the 3-2 Bundesliga 2 losing effort in their last game against Regensburg.

Fixtures involving Erzgebirge Aue have usually been lively affairs recently with plenty of scoring being a real hallmark. Over their past six games, the sum total of 20 goals have been recorded for both teams combined (at an average of 3.33 goals per game) with 5 of those coming from Erzgebirge Aue.

Taking a look at their past results, Erzgebirge Aue:

In their previous fixture, Hamburg drew 2-2 in the Bundesliga 2 match with Nuremberg.

In that match, Hamburg had 70% possession and 16 shots at goal with 6 on target. The only player on the scoresheet for Hamburg was Robert Glatzel (34', 79'). At the other end, 1. FC Nürnberg had 8 shots at goal with 2 of them on target. Enrico Valentini (22') and Lino Tempelmann (46') scored for Nuremberg.

Tim Walter's Hamburg have turned their attacks into goals a total of 10 times in the course of their most recent sextet of matches. The aggregate of goals that have been scored against them during that same period comes to 8.

Their past results show that Hamburg:

Looking at their most recent head-to-head meetings going back to 10/11/2018 shows that Erzgebirge Aue have won 1 of them and Hamburg 3, with the number of drawn matches being 2.

The last league game featuring the two was Bundesliga 2 match day 20 on 05/02/2021 which ended up with the score at Erzgebirge Aue 3-3 Hamburg.

In our view, Erzgebirge Aue have the ability to breach the defence of this Hamburg side, but one goal might not quite prevent them from conceding a couple at the other end.

We therefore reckon that it will be a very close game with a 1-2 advantage for Hamburg at the end of the 90 minutes. We are expecting it to be pretty even. 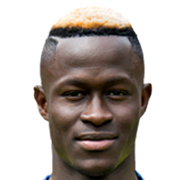 Generally deployed in the Striker position, Babacar Guèye was born in Senegal. After having made a senior debut playing for ESTAC in the 2014 - 2015 season, the talented Forward has netted 2 league goals in the 2. Bundesliga 2021 - 2022 season so far in 6 appearances.

We have made these Erzgebirge Aue v Hamburg predictions for this match preview with the best intentions, but no profits are guaranteed. Please always gamble responsibly, only with money that you can afford to lose.