Our Exeter City v Grimsby Town tips, poll and stats can be seen in full below - as well as up-to-date odds.

Exeter City will play in this fixture following on from a 1-1 League Two stalemate versus Newport County.

The only scorer from Exeter City was Ryan Bowman (22'). Dominic Telford (88') scored for Newport County.

It has not been often in recent times that Exeter City haven’t conceded. The reality is that The Grecians have seen their defence breached in 5 of their previous 6 matches, leaking 7 goals in the process.

Going into this contest, Exeter City are unbeaten in the league by Grimsby Town in their last 2 matches.

Since a loss in their previous game against Newport County in League Two action, Grimsby Town and their travelling supporters will be hoping that they can get a better result in this one.

Nicky Maynard (51') was the scorer for Newport County.

The attacking players from Grimsby Town have failed to get amongst the goals over their previous six encounters, netting the unsatisfactory return of only 2. In those matches, The Mariners have also seen the collective goal tally against them equal 11. That being said, we’ll just have to find out if the trend will persist in this upcoming match.

Going into this game, the form guide shows that Grimsby Town:

Looking over their prior head-to-head meetings dating back to 24/02/2018 shows us that Exeter City have won 3 of them and Grimsby Town 2, with the number of draws being 1.

A total of 14 goals were produced between them in these games, with 8 of them from The Grecians and 6 netted by The Mariners. The average goals per game has been 2.33.

The last league fixture between the two was League Two match day 15 on 01/12/2020 which ended up with the score at Grimsby Town 1-4 Exeter City.

Availability isn’t a big problem, with just the sole fitness concern for the Exeter City manager Matt Taylor to be concerned with from an otherwise complete squad. Rory McArdle (Knee Injury) won’t play. Suspended players who are serving a ban for this game are Ryan Bowman and Alex Hartridge.

Thanks to a completely injury-free squad ready to go, Grimsby Town manager Paul Hurst doesn’t have any fitness concerns to speak of coming into this clash.

Looking at these two teams, we feel that Exeter City should create the chances to score more than once when they line up against Grimsby Town, who might well find it a difficult task to get a goal of their own.

We’re predicting a fairly comfortable 2-0 winning score for Exeter City at the end of the 90 minutes. 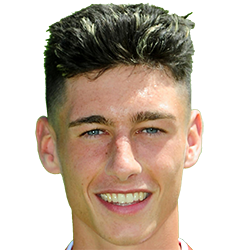 Typically taking to the field in the Centre Midfield position, Joel Randall was born in Barnstaple, England. After having made a senior debut playing for Exeter City in the 2020 - 2021 season, the accomplished Midfielder has managed 6 league goals in this League Two 2020 - 2021 campaign so far in a total of 22 appearances.

We have made these Exeter City v Grimsby Town predictions for this match preview with the best intentions, but no profits are guaranteed. Please always gamble responsibly, only with money that you can afford to lose. Best of luck.