FC Vaduz line up against visiting rivals FC Luzern at Rheinpark Stadion in this Super League game on Saturday.

View all of the FC Vaduz v FC Luzern predictions, poll and stats below - as well as up-to-date odds.

FC Vaduz will be hoping for a better result following a 1-0 Super League losing effort in their last game against St Gallen.

It has been all too rare in recent times where FC Vaduz haven’t conceded. It will be a concern for them that Residenzler have failed to prevent opponents from scoring in 5 of their previous 6 clashes, giving up 6 goals during that time.

Their prior results show that FC Vaduz:

FC Luzern will come into the encounter following a 3-1 Super League win to defeat FC Zürich in their previous game.

In that game, FC Luzern managed 49% possession and 14 shots at goal with 5 of them on target. For FC Luzern, goals were scored by Ibrahima Ndiaye (17') and Pascal Schürpf (95'). For their opponents, FC Zürich had 11 shots on goal with 2 of them on target. Tosin Aiyegun (3') and Bećir Omeragić (76' Own goal) scored for FC Zürich.

In the course of their 6 latest matches, Fabio Celestini's FC Luzern have seen their goal attempts be successful 10 times - yielding them the goals scored per game average of 1.67.

Looking over their past head-to-head clashes stretching back to 03/12/2016 tells us that FC Vaduz have won 0 of them and FC Luzern 3, with the tally of drawn games standing at 3.

A combined total of 17 goals were produced between them throughout the course of those matches, with 4 from Residenzler and 13 being from Die Leuchten. The average number of goals per game works out to 2.83.

The last league clash featuring these clubs was Super League match day 17 on 24/02/2021 which ended up with the score at FC Vaduz 1-1 FC Luzern.

Luzern boss Fabio Celestini has to choose from a squad that has some fitness concerns. Salah Aziz Binous (Cruciate Ligament Rupture), Tsiy William Ndenge (Meniscal Injury) and Marvin Schulz (Intraarticular ligament crack in the ankle) are names that won’t be on the team sheet. Pascal Schürpf will not be able to play in this game through being suspended.

When taking everything into account, FC Vaduz could find themselves struggling to score against this FC Luzern lineup who we think should score one, at least.

Therefore, we predict a very competitive game with a 0-1 win for FC Luzern at the end of the 90 minutes. 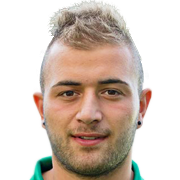 Normally taking to the field in the Striker position, Tunahan Çiçek was born in Arbon, Switzerland. Having played his first senior match for St Gallen in the 2010 - 2011 season, the accomplished Forward has managed to score 3 league goals in the Super League 2020 - 2021 campaign to date coming from a total of 27 appearances.

While we have made these predictions for FC Vaduz v FC Luzern for this match preview with the best of intentions, no profits are guaranteed. Always gamble responsibly, and with what you can afford to lose. Best of luck with your selections.