View all of the Nantes v Bordeaux predictions, poll and stats below - as well as the best betting odds.

Nantes, who won their previous game, will hope for a similar result following the 1-4 Ligue 1 success vs Brest.

Les Canaris have been conceding pretty frequently lately, although they have also found ways to score goals themselves. Analysis of their previous 6 games shows that Les Canaris have seen their goal breached in 6 of them in addition to scoring in 5 of those games. With no two games being the same, we’ll just have to find out whether that trend will be maintained in this game.

Analysis of their past results shows that Nantes:

Bordeaux will go into this game following a 1-0 Ligue 1 win to defeat Rennes in their previous match.

Heading into this fixture, Girondins de Bordeaux are without an away win for the past 3 league games.

A glance at their most recent head to head clashes going back to 20/01/2018 shows us that Nantes have won 1 of these games and Bordeaux 4, with the tally of drawn matches being 1.

A combined sum of 8 goals were yielded between them in these games, with 1 from Les Canaris and 7 for Les Girondins. The average number of goals per game works out to 1.33.

The last league contest featuring these sides was Ligue 1 match day 1 on 21/08/2020 when the final score was Girondins de Bordeaux 0-0 Nantes.

In that game, Girondins de Bordeaux managed 43% possession and 5 shots at goal with 1 of them on target.

Nantes got 6 attempts on goal with 1 on target.

Nantes manager Antoine Kombouaré will be thankful to have no fitness concerns to speak of before this match with a completely healthy group to choose from.

We’re inclined to think that Bordeaux should have enough to put one past this Nantes side, however it possibly won’t be enough to prevent defeat.

We can see a close game with a 2-1 victory for Nantes by the time that the referee blows the final whistle. There looks to be little in this one. 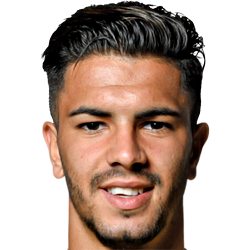 Normally played in the Central Attacking Midfielder position, Imran Louza was born in Nantes, France. After making a first senior appearance for Nantes in the 2018 - 2019 season, the talented Midfielder has hit 6 league goals in this Ligue 1 2020 - 2021 campaign so far in 30 appearances.

We have made these Nantes v Bordeaux predictions for this match preview with the best intentions, but no profits are guaranteed. Please always gamble responsibly, only with money that you can afford to lose. Good luck with your selections.