The Super Lig tie at Şenol Güneş Spor Kompleksİ on Sunday will see home side Trabzonspor prepare for the visit of Gaziantep.

Our Trabzonspor v Gaziantep predictions, statistics and match poll can be seen below - plus the latest betting odds.

Trabzonspor will be looking for another win after the 2-1 Europa League victory against Red Star Belgrade.

Abdullah Avcı's Trabzonspor have hit the back of the net 7 times over their preceding six outings. The number of goals that have been scored against them in those fixtures is 7.

In the game prior to this, Gaziantep drew 1-1 in the Super Lig tie with Ümraniyespor.

Looking at their form, and Gaziantep have been scored against in 5 of their last 6 games, with opponents netting 7 goals in total. At the back, Gaziantep seem to have a bit of a soft underbelly.

An examination of their prior head to head clashes stretching back to 19/10/2019 tells us that Trabzonspor have won 3 of them & Gaziantep 0, with the number of drawn matches being 3.

13 goals were scored between the two sides throughout the course of those matches, with 10 for Karadeniz Fırtınası and 3 for Gaziantep. This gives an average number of goals per game equal to 2.17.

The previous league encounter featuring these clubs was Super Lig match day 32 on 09/04/2022 which finished with the scoreline of Gaziantep 0-0 Trabzonspor.

On that day, Gaziantep had 33% possession and 17 shots at goal with 6 on target.

Trabzonspor had 19 shots at goal with 5 of them on target.

The match was refereed by Erkan Özdamar.

Owing to a completely injury-free squad available for selection, the Gaziantep manager Erol Bulut has zero fitness worries to speak of before this game.

We’re thinking that Gaziantep have the capability to get a goal against this Trabzonspor side, however it probably shouldn’t be as many as the goals that they could concede.

Our tip is for a close game with a 2-1 victory for Trabzonspor when all is said and done. It will be interesting to see how this one goes. 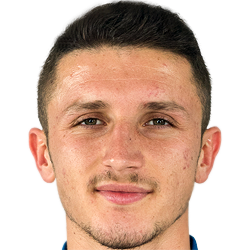 Mostly playing in the Central Attacking Midfielder position, Enis Bardhi was born in Skopje, Macedonia. After making a first senior appearance for Újpest FC in the 2014 - 2015 season, the skilful Midfielder has managed to score 2 league goals in the Süper Lig 2022 - 2023 campaign so far from a total of 4 appearances.

We have made these Trabzonspor v Gaziantep predictions for this match preview with the best intentions, but no profits are guaranteed. Please always gamble responsibly, only with money that you can afford to lose. Good luck with your selections.