Roma journey to Stadio Luigi Ferraris on Sunday for the Serie A fixture with hosts Genoa.

Genoa will play in this fixture coming off the back of a 2-2 Serie A draw vs Empoli.

It’s been a rare occasion in recent times that Genoa have shown defensive steel. It will be a concern for them that Genoa have been scored against in 5 of their previous 6 games, giving up 9 goals on the way.

Their prior results show that Genoa:

After a loss in their previous game against Venezia in Serie A competition, Roma will be aiming to make amends here.

The numbers tell their own story, and Roma have been scored against in 5 of their last 6 matches, letting opponents get 14 goals overall. Defensively, Roma could really do with shoring things up. Let’s see if that trend will be continued on here.

Coming into this contest, Roma haven't been defeated by Genoa when they have played them away from home in the previous 7 matches in the league. Travelling fans have really enjoyed these clashes.

An inspection of their past head to head meetings stretching back to 16/12/2018 shows that these encounters have ended in disappointment for Genoa. They have not been able to get any victories whatsoever while Roma have managed to find a way, winning in 67 per cent of those ties.

There were also plenty of goals scored in those games, 22 overall at an average of 3.67 goals per match.

The last league game featuring the two was Serie A match day 26 on 07/03/2021 which finished with the scoreline of Roma 1-0 Genoa.

In that game, Roma had 53% possession and 17 shots at goal with 2 on target. Their only player on the scoresheet was Gianluca Mancini (24').

On the other side, Genoa got 6 attempts on goal with 2 of them on target.

The Genoa boss Davide Ballardini does not have any fitness concerns to speak of ahead of this match with a completely injury-free group ready to go.

With a fully healthy group to choose from, the Roma boss José Mourinho doesn’t have any fitness worries to report ahead of this match.

We’ve got the feeling that Genoa have it within them to breach the defence of this Roma outfit, but a single goal might not quite be good enough.

Our tip is for both teams to score in a 1-2 winning margin for Roma when the full-time whistle blows. Expecting it to be very competitive. 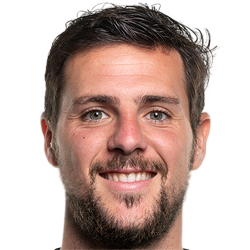 Typically played in the Striker position, Mattia Destro was born in Ascoli Piceno, Italy. After making a first senior appearance for Genoa in the 2010 - 2011 season, the skilful Forward has scored a sum of 6 league goals in the Serie A 2021 - 2022 season to date coming from a total of 8 appearances.

We have made these Genoa v Roma predictions for this match preview with the best intentions, but no profits are guaranteed. Please always gamble responsibly, only with money that you can afford to lose. We wish you the best of luck.