The Bundesliga 2 match at Sportpark Ronhof Thomas Sommer on Sunday will see home side Greuther Furth take to the field against Paderborn.

Greuther Furth will be looking for an improved result here after a 2-1 Bundesliga 2 defeat in their last game at the hands of Magdeburg.

Three or more goals per game were seen in 5 of the past 6 meetings where Greuther Furth have taken part. Their opponents scored 12 times in these games while Greuther Furth managed a tally of 8. However, we’ll just have to find out if that trend will continue on in this match.

Paderborn head into the clash after a 3-0 Bundesliga 2 win against Regensburg in their previous match.

A look at their most recent head to head meetings stretching back to 23/09/2015 tells us that Greuther Furth have won 2 of these games and Paderborn 1, with the tally of draws being 3.

The previous league clash featuring these sides was Bundesliga 2 match day 33 on 16/05/2021 when the final score was SC Paderborn 07 2-4 Greuther Furth.

On that day, SC Paderborn 07 had 52% possession and 12 attempts on goal with 3 on target. Their only player to score was Chris Führich (45').

The Greuther Furth manager Marc Schneider will be happy not to have any fitness concerns whatsoever before this clash owing to a completely healthy squad ready to go.

Paderborn manager Lukas Kwasniok has not got a full squad to pick from. Jannis Heuer (Torn Ligament) and Sebastian Klaas (Cruciate Ligament Rupture) are those who can’t be considered.

In this match, Greuther Furth are certainly able to put one past this SC Paderborn 07 team, although just one goal probably won’t be as many as the goals that they could concede.

We’re therefore expecting a narrow 1-2 winning score for SC Paderborn 07 when all is said and done. Could easily go either way, this. 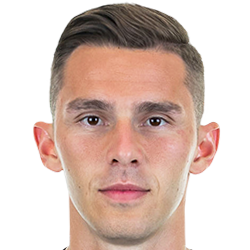 Typically used in the Striker position, Branimir Hrgota was born in Zenica, Bosnia and Herzegovina. After having made a senior debut playing for Jönköpings Södra IF in the 2011 season, the talented Forward has scored 3 league goals in this 2. Bundesliga 2022 - 2023 campaign to date from a total of 8 appearances.

We have made these Greuther Furth v SC Paderborn 07 predictions for this match preview with the best intentions, but no profits are guaranteed. Please always gamble responsibly, only with money that you can afford to lose. Best of luck with your selections.