The Prva Liga tie at Stadion Poljud on Sunday will see home side Hajduk Split take on Šibenik.

Our full set of predictions, statistics and match poll for Hajduk Split v Šibenik can be seen below - as well as the best betting odds.

Hajduk Split head into this match following on from a 2-2 Prva Liga tied result against Slaven Belupo.

Hajduk Split have been conceding pretty frequently recently, but they have also done enough to hit the back of the net themselves. Analysis of their previous 6 games shows that Hajduk Split have seen their goal breached in 5 of them as well as managing to get on the scoresheet in 6 of those games. Such a pattern isn’t assured to be sustained into this next game, however.

Going into this game, the form guide shows that Hajduk Split:

Since being beaten in their last game against NK Osijek in Prva Liga competition, Šibenik and their fans will hope to get a better result this time.

It is worth noting that Šibenik have suffered from a lack of goals in their past six encounters, recording the disappointing return of just 2. In those fixtures, Šibenik have also seen the overall goal aggregate of their opponents equal 10.

Their past results show that Šibenik:

Checking on their most recent head to head clashes dating back to 16/05/2021 shows us that Hajduk Split have won 4 of these & Šibenik 1, with the number of drawn results being 1.

A combined total of 14 goals were produced between them in this period, with 9 from Bili and 5 coming from Šibenik. That is an average goals per game value of 2.33.

The previous league clash featuring these sides was Prva Liga match day 9 on 09/09/2022 when the final score was Šibenik 1-1 Hajduk Split.

In that game, Šibenik had 39% possession and 8 attempts on goal with 3 of them on target. Their only player to score was Ivan Dolček (97').

On the other side, Hajduk Split had 9 attempts on goal with 4 on target. Jan Mlakar (49') was the scorer.

Thanks to a completely healthy group available to select from, the Šibenik boss Mario Cvitanović has no fitness concerns at all coming into this match.

We’re inclined to think that Hajduk Split look likely to get amongst the goals when they meet Šibenik, who may well struggle scoring a goal of their own.

We’re therefore anticipating a decent 2-0 win for Hajduk Split at the end of this one. 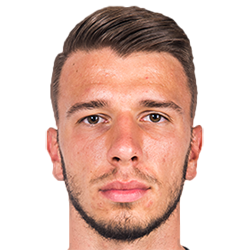 Regularly deployed in the Striker position, Jan Mlakar was born in Ljubljana, Slovenia. After having played his first senior match for Fiorentina in the 2016 - 2017 season, the skilful Forward has struck 4 league goals in the HNL 2022 - 2023 campaign so far in 16 appearances.

While we have made these predictions for Hajduk Split v Šibenik for this match preview with the best of intentions, no profits are guaranteed. Always gamble responsibly, and with what you can afford to lose.