Return to this page a few days before the scheduled game when this expired prediction will be updated with our full preview and tips for the next match between these teams.
Full-Time Result Prediction for Hellas Verona vs Genoa
Hellas Verona to Win
Hellas Verona will face off against visiting team Genoa at Stadio Marcantonio Bentegodi in this Serie A game on Sunday.

We envisage that Genoa have the firepower to find the back of the net against this Hellas Verona side, but that possibly won’t quite be as many as they’ll concede. We’re tipping a 2-1 winning margin for Hellas Verona by the conclusion of the game. It’s a very tough call. Our tips, poll and stats for Hellas Verona v Genoa can all be found here - along with the latest match odds.

Taking a look at their past results, Genoa:

A look at their previous results shows us that Hellas Verona: 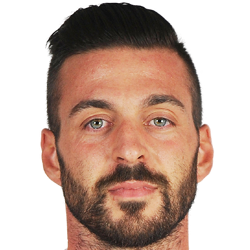 Mostly played in the Striker position, Samuel Di Carmine was born in Florence, Italy. Having played his first senior match for Fiorentina in the 2006 - 2007 season, the dangerous Forward has contributed 3 league goals in the Serie A 2019 - 2020 campaign so far from a total of 9 appearances.

While we have made these predictions for Hellas Verona v Genoa for this match preview with the best of intentions, no profits are guaranteed. Always gamble responsibly, and with what you can afford to lose.