Return to this page a few days before the scheduled game when this expired prediction will be updated with our full preview and tips for the next match between these teams.
Full-Time Result Prediction
👉
Urawa Red Diamonds to Win

Scroll down to see all of the predictions, poll and statistics for Urawa Red Diamonds v Nagoya Grampus - plus the latest betting odds.

Urawa Red Diamonds will be looking to improve on their last outing here following a 3-0 J1 League loss in their previous game against Nagoya Grampus.

Urawa Red Diamonds haven’t had any problems with scoring, finding the back of the net in one hundred percent of their last 6 games.

They’ve managed to rack up 12 during that time while also conceding a total of 6. It will be interesting to find out if that trend will be sustained here.

Over the course of 5 of the previous 6 clashes featuring Nagoya Grampus, a notably low volume of goals have been scored between them and their opposition. The overall average number of goals per game within that spell works out to a paltry 1.83, with the average goals for N. Grampus equalling 0.83.

Looking over their past head to head meetings going back to 08/08/2020 tells us that Urawa Red Diamonds have won 1 of these games & Nagoya Grampus 2, with the tally of drawn games standing at 3.

A combined sum of 14 goals were yielded between them during those clashes, with 6 of them from Reds and 8 netted by N. Grampus. That’s an average goals per game figure of 2.33.

The last league game between these clubs was J1 League match day 24 on 06/08/2022 when it finished Nagoya Grampus 3-0 Urawa Red Diamonds.

On the other side, Urawa Red Diamonds got 10 attempts on goal with 0 of them on target.

We’re of the opinion that Nagoya Grampus could find themselves up against it to see themselves scoring against this Urawa Red Diamonds outfit who will likely end up scoring and possibly keep a clean sheet as well.

We’re therefore tipping a very even match with a 1-0 advantage for Urawa Red Diamonds at full-time. 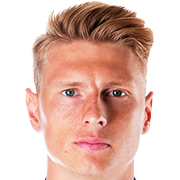 Mostly deployed in the Striker position, Kasper Junker was born in Denmark. After having played his first senior match for Randers in the 2013 - 2014 season, the skilful Forward has got 4 league goals in the J1 League 2022 campaign so far in 12 appearances.

While we have made these predictions for Urawa Red Diamonds v Nagoya Grampus for this match preview with the best of intentions, no profits are guaranteed. Always gamble responsibly, and with what you can afford to lose. Good luck with your selections.