OFI Crete will do battle with visiting team Panathinaikos at Theodoros Vardinogiannis Stadium in the Super League meeting on Sunday.

All OFI Crete v Panathinaikos game predictions, stats and user poll are shown below (plus the best game odds).

OFI Crete will be wanting a better result here after a 3-0 Super League loss in their previous game against PAOK.

It has been a rare occasion in recent times that OFI Crete haven’t conceded. The facts show that Omilos have been scored against in 6 of their previous 6 clashes, letting in 11 goals on the way.

Since a loss in their previous game against Aris FC in Super League competition, Panathinaikos will be aiming to make amends here.

Looking at their form, and Panathinaikos have been scored against in 5 of their last 6 matches, conceding 8 goals in all. At the back, To Trifylli have clearly had some problems. We shall soon see whether or not that trend can be continued on in this game.

Inspecting their most recent head-to-head meetings dating back to 09/12/2018 shows that OFI Crete have won 3 of them and Panathinaikos 1, with the tally of draws standing at 2.

A total of 19 goals were scored between the two sides during those clashes, with 12 of them from Omilos and 7 being from To Trifylli. The average goals per game has been 3.17.

Due to a mostly healthy group, there’s only the sole fitness issue for the Panathinaikos gaffer Dani Poyatos to be concerned about. Fotis Ioannidis (Foot Injury) won’t be in action.

Here, we’re thinking that OFI Crete may not find it easy to put one past this Panathinaikos lineup who we think will get the vital goal that wins it.

Therefore, we predict a 0-1 advantage for Panathinaikos at the end of the 90 minutes.

Over/Under 2.5 Goals Prediction for OFI Crete vs Panathinaikos
Under 2.5 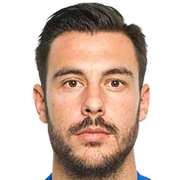 Normally taking up the Central Attacking Midfielder position, Sardinero was born in Madrid, Spain. Having made his senior debut playing for Getafe CF in the 2010 - 2011 season, the dangerous Midfielder has accumulated 3 league goals in this Super League 2020 - 2021 season to date in a total of 4 appearances.

While we have made these predictions for OFI Crete v Panathinaikos for this match preview with the best of intentions, no profits are guaranteed. Always gamble responsibly, and with what you can afford to lose. Good luck if you do place a bet today.