Raków Częstochowa come up against away team Radomiak Radom at Miejski Stadion Piłkarski in this Ekstraklasa match on Saturday.

View all of the Raków Częstochowa v Radomiak Radom predictions, poll and stats below - as well as up-to-date odds.

Raków Częstochowa, buoyed by their previous result, will be hoping for more of the same after the 1-0 Ekstraklasa triumph over Radomiak Radom.

Over their preceding six fixtures, Marek Papszun's Raków Częstochowa have scored a total of 11 times which gives them an average number of goals scored per match of 1.83.

Mariusz Lewandowski's Radomiak Radom have fired home 9 times in the course of their most recent sextet of matches. The aggregate of goals that have been scored against them during those same matches adds up to 5.

The previous league contest between the two was Ekstraklasa match day 21 on 12/02/2022 which ended up with the score at Radomiak Radom 0-1 Raków Częstochowa.

On that occasion, Radomiak Radom managed 54% possession and 13 shots on goal with 1 of them on target.

Raków Częstochowa got 10 attempts on goal with 5 on target. Giannis Papanikolaou (1') scored.

The Raków Częstochowa boss Marek Papszun has a full complement, with no fitness concerns at all before this game thanks to a fully healthy squad available for selection.

With a fully healthy squad available for selection, the Radomiak Radom manager Mariusz Lewandowski has no fitness concerns to speak of ahead of this match.

We feel that Raków Częstochowa can and should convert a lot of goal-scoring opportunities.

In contrast, Radomiak Radom won’t find it easy to get a goal of their own but we do think it’s quite likely that they will be managing to get on the scoresheet.

We’re predicting a 3-1 winning score for Raków Częstochowa when all’s said and done. 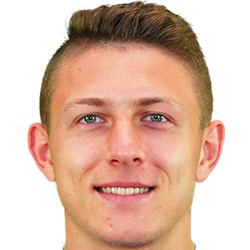 Mostly taking to the field in the Striker position, Fabian Piasecki was born in Wrocław, Poland. After having made a senior debut playing for Górnik Zabrze in the 2014 - 2015 season, the gifted Forward has managed to score 3 league goals in the Ekstraklasa 2022 - 2023 campaign so far coming from a total of 8 appearances.

While we have made these predictions for Raków Częstochowa v Radomiak Radom for this match preview with the best of intentions, no profits are guaranteed. Always gamble responsibly, and with what you can afford to lose. Good luck with your selections.