Our predictions, user poll and statistics for Seattle Sounders FC v San Jose Earthquakes can be found here (plus the best game odds).

Seattle Sounders FC prepare for this fixture after a 2-2 MLS stalemate against Real Salt Lake.

Matches with Seattle Sounders FC have usually been absorbing encounters lately with a lot of goalmouth action being a real hallmark. Over their past six games, the sum total of 22 goals have been scored for both sides combined (at an average of 3.67 goals per game) with 15 of them coming from The Sounders.

In their last game, San Jose Earthquakes drew 1-1 in the MLS tie with Colorado Rapids.

Indicating their predisposition for high-scoring matches, the back of the net has been hit 27 times in the prior 6 matches in which San Jose Earthquakes have sent out their troops, giving a mean average of 4.5 goals per clash. Opposing teams have got 15 from this total. Despite that, we will just have to wait and see if the trend shall persist here in this game.

An examination of their past head-to-head meetings going back to 26/07/2018 tells us that Seattle Sounders FC have won 3 of them and San Jose Earthquakes 0, with the tally of drawn matches standing at 3.

9 goals were shared by the two clubs in this period, with 6 from The Sounders and 3 belonging to Quakes. The average goals per game has been 1.5.

Seattle Sounders FC manager Brian Schmetzer will be happy not to have any fitness concerns whatsoever coming into this game thanks to a fully healthy group available to select from.

Due to a completely healthy squad to pick from, San Jose Earthquakes boss Matías Almeyda has zero fitness worries whatsoever ahead of this match.

San Jose Earthquakes will manage to score a goal against this Seattle Sounders FC team, although it is unlikely to prevent them from conceding a couple at the other end.

Our selection here is for a narrow 2-1 win for Seattle Sounders FC at the end of the match. Could easily see this go either way. 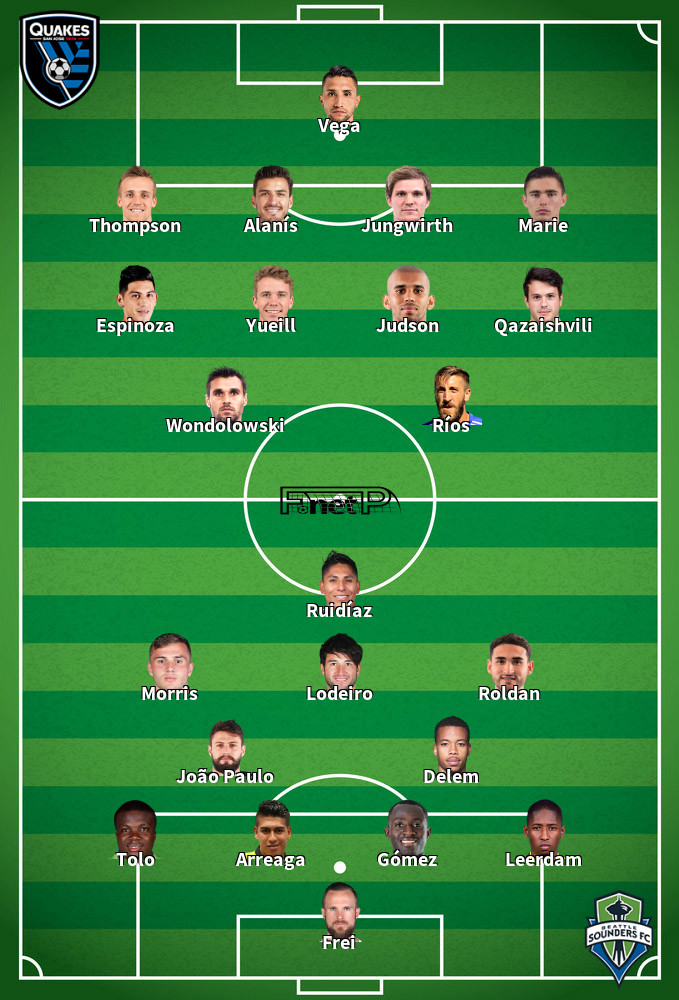 We have made these Seattle Sounders FC v San Jose Earthquakes predictions for this match preview with the best intentions, but no profits are guaranteed. Please always gamble responsibly, only with money that you can afford to lose. Good luck with your selections.