View all Sochi v Ufa tips, stats and our pre-match poll below including the latest game odds.

Sochi will be looking for another win after the 1-2 Premier League victory against Spartak Moscow.

In that game, Sochi managed 42% possession and 10 shots at goal with 3 on target. For Sochi, goals were scored by Maksim Barsov (66') and Artur Yusupov (72'). Spartak Moskva got 15 attempts on goal with 2 on target. Roman Zobnin (60') scored for Spartak Moscow.

Vladimir Fedotov's Sochi have hit the back of the net a sum total of 10 times in their past 6 outings. The comparative tally of goals that have been scored against them in those fixtures amounts to 5.

After being defeated in their last game at the hands of Krylia Sovetov in Premier League action, Ufa will be aiming to make amends here.

Ufa have been effective going forward leading up to this encounter, having scored 7 goals in their previous 6 matches. Having said that, Ufa have been somewhat leaky at the back, having also been scored against in 6 of those same outings.

The last league fixture featuring these clubs was Premier League match day 27 on 25/04/2021 and the score finished Ufa 2-3 Sochi.

That time, Ufa managed 66% possession and 22 shots on goal with 8 of them on target. The goalscorers were Vyacheslav Krotov (19') and Timur Zhamaletdinov (78').

The match was refereed by Yegor Panin.

We envisage that Ufa have enough to score a goal against this Sochi outfit, but it may not prevent them from conceding a couple at the other end.

We’re predicting a narrow 2-1 win for Sochi at the end of this one. 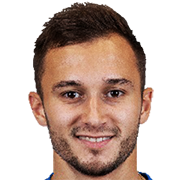 Customarily taking to the field in the Striker position, Maksim Barsov was born in Tver, Russia. After having made a senior debut playing for Sochi in the 2020 - 2021 season, the accomplished Forward has contributed 2 league goals in the Premier League 2021 - 2022 campaign so far in a total of 5 appearances.

While we have made these predictions for Sochi v Ufa for this match preview with the best of intentions, no profits are guaranteed. Always gamble responsibly, and with what you can afford to lose. Good luck with your selections.