Return to this page a few days before the scheduled game when this expired prediction will be updated with our full preview and tips for the next match between these teams.
Full-Time Result Prediction
👉
AFC Wimbledon to Win

Morecambe will arrive at Plough Lane on Saturday for the League One tie with home side AFC Wimbledon.

View all of the AFC Wimbledon v Morecambe predictions, poll and stats below - as well as up-to-date odds.

AFC Wimbledon will be hoping for a better result after the 1-0 League One defeat in their last game at the hands of MK Dons.

Following on from a loss in their previous game against Tottenham Hotspur in FA Cup competition, Morecambe will be hoping to turn things around here.

Illustrating their appetite for high-scoring matches, goals have been celebrated 21 times in the previous six games in which Morecambe have taken to the field, giving a mean average of 3.5 goals for each clash. Their opponents have hit 15 of those goals. We shall soon find out if that trend will be sustained in this game.

A look at their past head-to-head clashes dating back to 26/04/2014 shows us that AFC Wimbledon have won 2 of these games & Morecambe 3, with the tally of drawn matches standing at 1.

Those games weren’t short on goals, either, with 23 in all at an average of 3.83 goals per meeting.

The AFC Wimbledon boss Mark Robinson does not have any fitness worries whatsoever before this clash with a completely healthy squad to choose from.

Owing to a completely healthy group to pick from, the Morecambe boss Stephen Robinson doesn’t have any fitness concerns at all before this game.

We’re of the view that AFC Wimbledon will, in all likelihood, be able to create a decent number of chances and shots on target.

At the other end, Morecambe may well struggle finding the net themselves although we do think that they will probably end up converting at least once as well.

We reckon that it will be a fairly comfortable 3-1 victory for AFC Wimbledon at full-time. 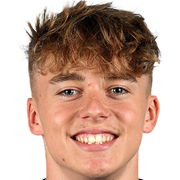 Mostly deployed in the Centre Midfield position, Luke McCormick was born in Bury St Edmunds, England. After having played his first senior match for AFC Wimbledon in the 2021 - 2022 season, the skilful Midfielder has managed 4 league goals in this League One 2021 - 2022 campaign so far in a total of 20 appearances.

We have made these AFC Wimbledon v Morecambe predictions for this match preview with the best intentions, but no profits are guaranteed. Please always gamble responsibly, only with money that you can afford to lose. We wish you the best of luck.