AIK face off with visitors Djurgårdens IF at Friends Arena in the Allsvenskan meeting on Sunday.

Our full set of predictions, statistics and match poll for AIK v Djurgårdens IF can be seen below - along with the latest match odds.

AIK will be hoping for a better result after a 4-0 Allsvenskan defeat last time out to BK Häcken.

AIK haven’t exactly had impressive attacking statistics in more recent games. Their goals record equals just 4 versus opposition teams over their previous six fixtures. In those games, Gnaget have also seen the tally of goals against them come to 10.

Their past results show that AIK:

In their previous game, Djurgårdens IF drew 0-0 in the Allsvenskan match with Östersunds FK.

In the course of their six previous matches, Kim Bergstrand's Djurgårdens IF have converted a total of 5 times - yielding them the goals per game average of 0.83.

Ahead of this meeting, Djurgårdens IF have left without a victory over AIK in games played away from home for the previous 8 matches in the league. Not an away record to be proud of.

Looking at their past head to head clashes dating back to 27/08/2017 shows that AIK have won 3 of these & Djurgårdens IF 1, with the tally of drawn games standing at 2.

A total of 9 goals were scored between them in these games, with 6 from Gnaget and 3 being from Blåränderna. That is an average goals per game value of 1.5.

The previous league contest featuring these clubs was Allsvenskan match day 22 on 01/09/2019 and the score finished AIK 1-0 Djurgårdens IF.

In that game, AIK had 28% possession and 7 shots on goal with 4 of them on target. Their only player on the scoresheet was Sebastian Larsson (23').

At the other end, Djurgårdens IF got 14 shots at goal with 2 on target.

In all likelihood, Gnaget will probably make use of the 3-4-3 formation for this one with Jakob Haugaard, Rasmus Lindkvist, Per Karlsson, Robin Tihi, Eric Kahl, Sebastian Larsson, Bilal Hussein, Robert Lundström, Kolbeinn Sigthorsson, Heradi Rashidi and Paulos Abraham.

With a fully healthy squad to pick from, Djurgårdens IF manager Kim Bergstrand has no fitness worries at all coming into this clash.

We’re inclined to think that Djurgårdens IF and AIK could both end up scoring in a what should be a good tussle with little between the two teams.

It could well end in a draw. That’s why we have predicted a tight encounter, finishing with a 1-1 score at full-time.

Both Teams to Score Prediction for AIK vs Djurgårdens IF
Yes 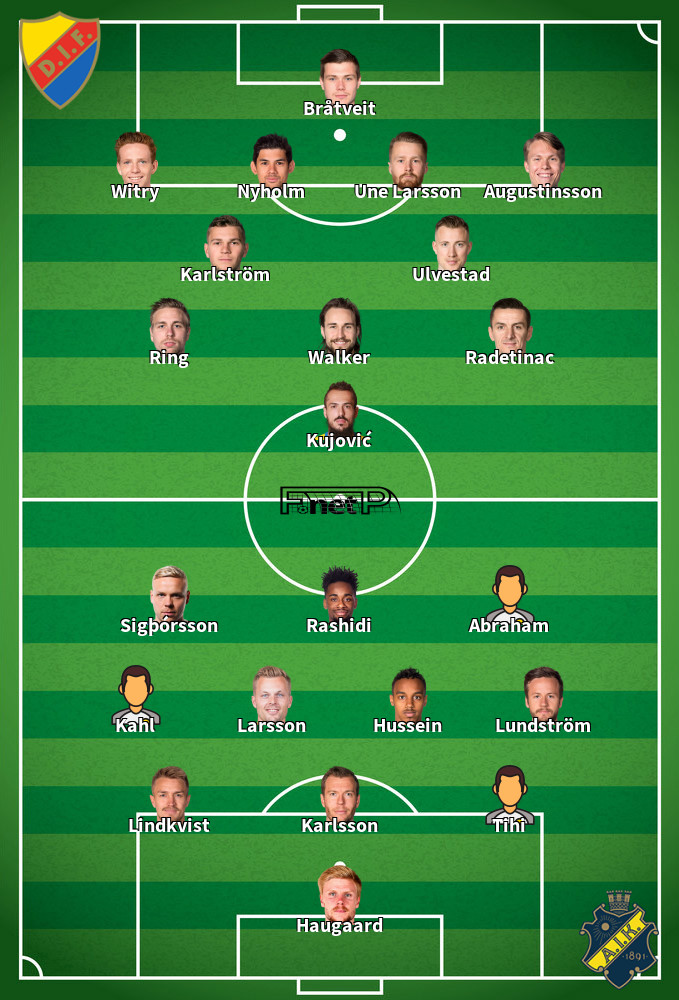 Mostly playing in the Left Wing position, Paulos Abraham was born in Sweden. Having made his senior debut playing for AIK in the 2020 season, the goalscoring Forward has hit 2 league goals in the Allsvenskan 2020 campaign so far from a total of 7 appearances.

We have made these AIK v Djurgårdens IF predictions for this match preview with the best intentions, but no profits are guaranteed. Please always gamble responsibly, only with money that you can afford to lose.