Altrincham will do battle with guests Boreham Wood at J. Davidson Stadium in the National League clash on Saturday.

Our Altrincham v Boreham Wood tips, poll and stats can be seen in full below - as well as up-to-date odds.

Altrincham won’t want a repeat of their last result here after the 1-0 National League defeat in their last game at the hands of Chesterfield.

At least three goals per game were recorded in 5 of the past 6 fixtures where Altrincham have taken part. Opposing sides scored 10 times in this period whereas Altrincham amassed a tally of 12. Let’s find out if that trend will be sustained in this game.

Following on from being defeated in their last game at the hands of Accrington Stanley in FA Cup action, Boreham Wood and their fans will hope to get a better result this time.

Looking at their form, and Boreham Wood have been scored against in 6 of their last 6 games, seeing opposing sides hit 7 goals in all. Defensively, Boreham Wood can certainly do much better.

Their prior results show that Boreham Wood:

If we look at their past head to head meetings dating back to 21/11/2015, neither club has come out on top overall with Altrincham winning 2 of those games, Boreham Wood 2 and 2 being draws after 90 minutes of play.

A combined total of 13 goals were produced between them in this period, with 6 for Robins and 7 belonging to The Wood. The average number of goals per game works out to 2.17.

The last league match featuring the two was National League match day 5 on 27/08/2022 when the final score was Boreham Wood 1-1 Altrincham.

The Altrincham manager Phil Parkinson has a full complement, with no fitness worries whatsoever ahead of this game with a fully healthy group available for selection.

Owing to a fully injury-free group to choose from, the Boreham Wood manager Luke Garrard has no fitness worries whatsoever ahead of this match. Bruno Andrade cannot play in this game through suspension.

We’re thinking that Boreham Wood will manage to score a goal against this Altrincham outfit, although that probably won’t be enough to avoid defeat.

We are anticipating a very close game with a 2-1 win for Altrincham when all is said and done. Should be a good one. 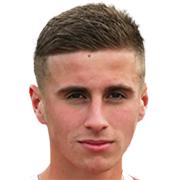 Usually played in the Left Wing position, Ryan Colclough was born in Stoke-on-Trent, England. After having played his first senior match for Crewe Alexandra in the 2012 - 2013 season, the accomplished Forward has hit 7 league goals in the National League 2022 - 2023 campaign to date in 25 appearances.

We have made these Altrincham v Boreham Wood predictions for this match preview with the best intentions, but no profits are guaranteed. Please always gamble responsibly, only with money that you can afford to lose. Good luck if you do place a bet today.