Frosinone host away team Benevento at Stadio Benito Stirpe in this Serie B tie on Sunday.

Scroll down to see all of the predictions, poll and statistics for Frosinone v Benevento - plus the latest betting odds.

Frosinone, buoyed by their previous result, will be hoping for more of the same after the 1-3 Serie B success versus Brescia.

Their most recent results highlight the fact that much solidity has been shown by the Frosinone rearguard. Frosinone have been stingy, resulting in the total number of goals that have flown into the back of their net over the course of their past six matches standing at 3.

Ahead of this clash, Frosinone are undefeated in their previous 10 home league matches. They have been so resilient here.

Following on from suffering a loss in their previous game against Genoa in Serie B action, Benevento and their fans will hope to get a better result this time.

In that match, Benevento managed 48% possession and 12 shots on goal with 1 of them on target. The only player to score for Benevento was Andrés Tello (58'). On the other side, Genoa had 14 attempts at goal with 3 on target. Massimo Coda (12') and George Puşcaş (94') scored for Genoa.

In 5 of the prior six games involving Benevento, a comparatively low number of goals have been struck between them and opposing teams. The overall average number of goals per game during that spell comes to a meagre 1.83, with the number of goals averaged by Benevento standing at 0.83. Previous results aside, time will tell if the trend will be replicated in this next game.

Looking at their past form shows that Benevento:

Inspecting their prior head to head meetings dating back to 13/05/2017 tells us that Frosinone have won 2 of these games and Benevento 4, with the number of drawn results standing at 0.

An aggregate of 19 goals were shared by the two clubs during those clashes, with 10 of them from Canarini and 9 coming from Benevento. That is an average goals per game value of 3.17.

The previous league fixture featuring the two was Serie B match day 3 on 28/08/2022 and the score finished Benevento 2-1 Frosinone.

That time, Benevento managed 49% possession and 7 attempts at goal with 4 on target. Their only player on the scoresheet was Francesco Forte (35', 62').

At the other end, Frosinone had 11 attempts at goal with 6 on target. Luca Garritano (59') scored.

The match was refereed by Luca Pairetto.

Thanks to a fully injury-free group to choose from, the Benevento manager Fabio Cannavaro does not have any fitness concerns at all coming into this clash.

We believe that Benevento will likely create enough chances to put one past this Frosinone team, but it might not be as many as they’ll concede.

We’re predicting a 2-1 win for Frosinone at full-time. Expecting it to be very competitive. 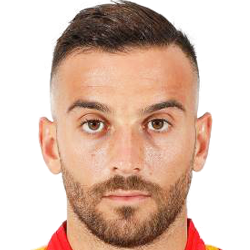 Regularly playing in the Right Wing position, Roberto Insigne was born in Italy. Having made his senior debut playing for SSC Napoli in the 2012 - 2013 season, the dangerous Forward has hit 6 league goals in this Serie B 2022 - 2023 season so far coming from a total of 15 appearances.

While we have made these predictions for Frosinone v Benevento for this match preview with the best of intentions, no profits are guaranteed. Always gamble responsibly, and with what you can afford to lose. Best of luck.