Our tips, poll and stats for Bohemians 1905 v Teplice can all be found here including the latest game odds.

Bohemians will be looking to improve on their last outing here following a 4-1 First League defeat last time out to Baník Ostrava.

At least three goals per game were recorded in 5 of the past 6 meetings where Bohemians 1905 have participated. Opposition teams scored 17 times in this period whereas Bohemians 1905 bagged a total of 13. Regardless, time will tell if that trend might be replicated in this upcoming match.

Coming into this fixture, Bohemians 1905 are unbeaten in the league by Teplice in their last 2 games.

Teplice come into this encounter after a 2-1 First League win in the defeat of Slovan Liberec in their most recent fixture.

For Teplice, the goalscorers were Filip Žák (6') and Jakub Urbanec (60'). Jan Mikula (18') was the scorer for Slovan Liberec.

The stats don’t lie, and Teplice have been scored against in 6 of their last 6 matches, conceding 13 goals in total. Defensively, Teplice can certainly do much better.

A look at their previous results shows us that Teplice:

A glance at their prior head-to-head clashes going back to 21/11/2020 tells us that Bohemians have won 3 of them and Teplice 1, with the tally of draws being 2.

A combined total of 16 goals were scored between them in this period, with 10 of them from Klokani and 6 belonging to Skláři. The average number of goals per game works out to 2.67.

The referee was Tomas Batík.

The Bohemians manager Jaroslav Veselý will be thankful to have no fitness concerns at all ahead of this clash thanks to a fully healthy group available to select from.

Our thinking is that Teplice have it in them to score against this Bohemians 1905 side, although it probably won’t be as many as they will have scored against them.

We’re expecting a very close game with a 2-1 win for Bohemians 1905 when all is said and done. Should be an interesting one. 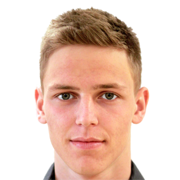 Generally deployed in the Striker position, David Puškáč was born in Czech Republic. After having played his first senior match for Slezský FC Opava in the 2018 - 2019 season, the dangerous Forward has got 3 league goals in this First League 2022 - 2023 season so far from a total of 12 appearances.

We have made these Bohemians 1905 v Teplice predictions for this match preview with the best intentions, but no profits are guaranteed. Please always gamble responsibly, only with money that you can afford to lose. Good luck with your selections.