Cherno More Varna head into this match after a 0-0 First League draw vs Botev.

Their latest results really do illustrate the point that quality has been evident in the Cherno More Varna backline. The Sailors have been mean at the back, with the number of goals that have gone past their goalkeeper during their past 6 clashes standing at 4.

Heading into this fixture, Cherno More Varna have not been beaten in the league by Botev Vratsa in their last 2 games.

Botev Vratsa will go into the clash after a 5-1 First League win as they beat Etar Veliko Tarnovo in their most recent outing.

A succession of dependable performances by the Botev Vratsa defenders has resulted in the number of goals they’ve conceded amounting to 4 from their past 6 clashes combined. In that period of time, their forwards have scored 9. However, we’ll just have to find out if the trend will continue on in this upcoming match or not.

Going into this contest, Botev Vratsa haven’t won away from home in the past 2 matches in the league.

Checking out their prior head to head duels dating back to 09/12/2012, both clubs have shared the honours with Cherno More Varna winning 2 of those games, Botev Vratsa 2 and 2 being drawn in regulation time.

An aggregate of 16 goals were produced between them in this period, with 9 of them for The Sailors and 7 coming from Vratsa. The average number of goals per game works out to 2.67.

The previous league contest featuring the two was First League match day 18 on 30/11/2019 when the final score was Cherno More Varna 4-1 Botev Vratsa.

The referee was Nedelcho Gadzhalov.

Cherno More Varna manager Ilian Iliev does not have any fitness worries at all ahead of this clash with a completely healthy squad available to select from.

Owing to a fully healthy group to pick from, Botev Vratsa manager Antoni Zdravkov has no fitness worries at all before this game.

In this match, Cherno More Varna will, in all likelihood, be able to create a good number of chances & successful shots on target.

Conversely, Botev Vratsa might well find it a difficult task getting goals although we do reckon that they could well end up being dangerous for periods.

We’re tipping a fairly comfortable 3-1 win for Cherno More Varna at the end of the 90 minutes. 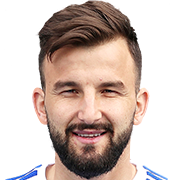 Generally taking up the Central Defensive Midfielder position, Vasil Panayotov was born in Bulgaria. Having made a first senior appearance for Pirin Gotse Delchev in the 2012 - 2013 season, the goalscoring Midfielder has got 2 league goals in this First League 2020 - 2021 season to date in a total of 12 appearances.

While we have made these predictions for Cherno More Varna v Botev Vratsa for this match preview with the best of intentions, no profits are guaranteed. Always gamble responsibly, and with what you can afford to lose.