Slavia Sofia will be facing visiting club Botev Vratsa at Stadion Slavia in this First League fixture on Thursday.

Full predictions, pre-match stats and user poll for Slavia Sofia v Botev Vratsa are shown on this page - along with the latest match odds.

In that game, Slavia Sofia had 56% possession and 5 attempts at goal with 2 of them on target. For Slavia Sofia, the goalscorers were Andrea Hristov (10' Own goal) and Georgi Valchev (45'). On the other side, Montana had 6 shots on goal with 4 on target.

It has not been often in recent times that Slavia Sofia have shown defensive steel. The reality is that The White Avalanche have seen their defence breached in 5 of their previous 6 matches, letting in 8 goals in the process.

Coming into this meeting, Slavia Sofia are without a win at home for the past 3 league games.

Botev Vratsa will go into this encounter following a 2-0 First League win versus Etar Veliko Tarnovo in their last game.

In that match, Botev Vratsa had 57% possession and 8 shots on goal with 6 on target. For Botev Vratsa, the scorers were Dorian Babunski (78') and Chavdar Ivaylov (90'). Etar Veliko Tarnovo had 8 attempts at goal with 4 of them on target.

The trend of at least one side getting a clean sheet in games featuring Botev Vratsa has become noticeable of late. A glance at their last six meetings shows that it’s occurred 5 times. During these clashes, their opponents have managed a goal total of 4 while Vratsa have scored 5. Nevertheless, we will just have to wait and see if that pattern shall continue on here in this game or not.

Their past results show that Botev Vratsa:

A glance at their most recent head to head clashes going back to 07/05/2019 shows us that Slavia Sofia have won 3 of these & Botev Vratsa 1, with the tally of drawn results being 2.

A sum of 12 goals were scored between them during those clashes, with 7 for The White Avalanche and 5 coming from Vratsa. That’s an average goals per game of 2.

The previous league game featuring these clubs was First League match day 25 on 20/04/2021 which finished with the scoreline of Slavia Sofia 0-2 Botev Vratsa.

On that occasion, Slavia Sofia had 55% possession and 10 attempts at goal with 5 on target.

Botev Vratsa had 9 attempts on goal with 4 of them on target. Hristo Zlatinski (17') and Valeri Domovchiyski (36') scored.

The match was refereed by Georgi Ginchev.

Slavia Sofia boss Aleksandr Tarkhanov has zero fitness concerns at all ahead of this game thanks to a fully healthy squad to choose from.

Thanks to a fully injury-free group to pick from, Botev Vratsa manager Veselin Velikov does not have any fitness concerns to report ahead of this match.

For this match, we think that Botev Vratsa have enough to score against this Slavia Sofia lineup, however that probably won’t prevent them from conceding a couple at the other end.

Our tip is for a very close game with a 2-1 winning score for Slavia Sofia by the conclusion of the game. There looks to be little in this one. 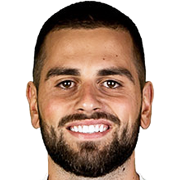 Generally used in the Centre Midfield position, Peter Makrillos was born in Sydney, Australia. After making a first senior appearance for Panionios in the 2017 - 2018 season, the dangerous Midfielder has contributed 4 league goals in this First League 2020 - 2021 campaign to date in 9 appearances.

While we have made these predictions for Slavia Sofia v Botev Vratsa for this match preview with the best of intentions, no profits are guaranteed. Always gamble responsibly, and with what you can afford to lose. We wish you the best of luck.