Return to this page a few days before the scheduled game when this expired prediction will be updated with our full preview and tips for the next match between these teams.
The Serie A fixture at Stadio Giuseppe Meazza on Wednesday sees home side Inter Milan facing opposition in the form of Brescia. Our predictions, user poll and statistics for Inter Milan v Brescia can be found here (plus the best game odds).

Inter Milan are hoping to win again following the 1-2 Serie A triumph over Parma.

In that match, Inter Milan had 66% possession and 24 attempts at goal with 7 on target. For Inter Milan, the scorers were Stefan de Vrij (84') and Alessandro Bastoni (87'). On the other side, Parma got 10 attempts on goal with 2 on target. Gervinho (15') was the scorer for Parma.

It’s been all too rare in recent times that Inter Milan have shown defensive steel. In fact, Nerazzurri have seen their defence breached in 6 of their previous 6 clashes, giving up 9 goals along the way. That sort of pattern won’t necessarily be carried forward into this match, of course.

Going into this game, the form guide shows that Inter Milan:

Last time out, Brescia drew 2-2 in the Serie A match with Genoa. In that match, Brescia managed 46% possession and 10 shots at goal with 4 on target. For Brescia, goals were scored by Alfredo Donnarumma (10') and Alessandro Semprini (13'). Genoa had 16 shots at goal with 7 of them on target. Iago Falqué (38') and Andrea Pinamonti (70') scored for Genoa.

The numbers tell their own story, and Brescia have been scored against in 6 of their last 6 matches, letting opponents get 11 goals overall. Defensively, Rondinelle have not been doing too well. That kind of pattern won’t necessarily be carried forward into this game, though.

Inspecting their most recent head-to-head meetings dating back to 29/02/2004 shows that Inter Milan have won 3 of these & Brescia 1, with the tally of drawn matches standing at 2.

In all, 15 goals were scored between the two sides during those clashes, with 9 from Nerazzurri and 6 created by Rondinelle. The average number of goals per game works out to 2.5.

The last league match featuring these clubs was Serie A match day 10 on 29/10/2019 when it finished Brescia 1-2 Inter Milan. On that occasion, Brescia had 42% possession and 15 attempts at goal with 6 of them on target. Inter Milan had 13 shots at goal with 2 on target. Lautaro Martínez (23'), Romelu Lukaku (63') and Milan Škriniar (76' Own goal) scored. The match was refereed by Michael Fabbri.

Our feeling is that Brescia would be disappointed if they were not to get a goal against this Inter Milan outfit, although that is unlikely to be enough to avoid a loss. We reckon that it will be a 2-1 winning margin for Inter Milan at the end of the match. Let’s wait and see how it plays out.

Both Teams to Score Prediction for Inter Milan vs Brescia
Yes 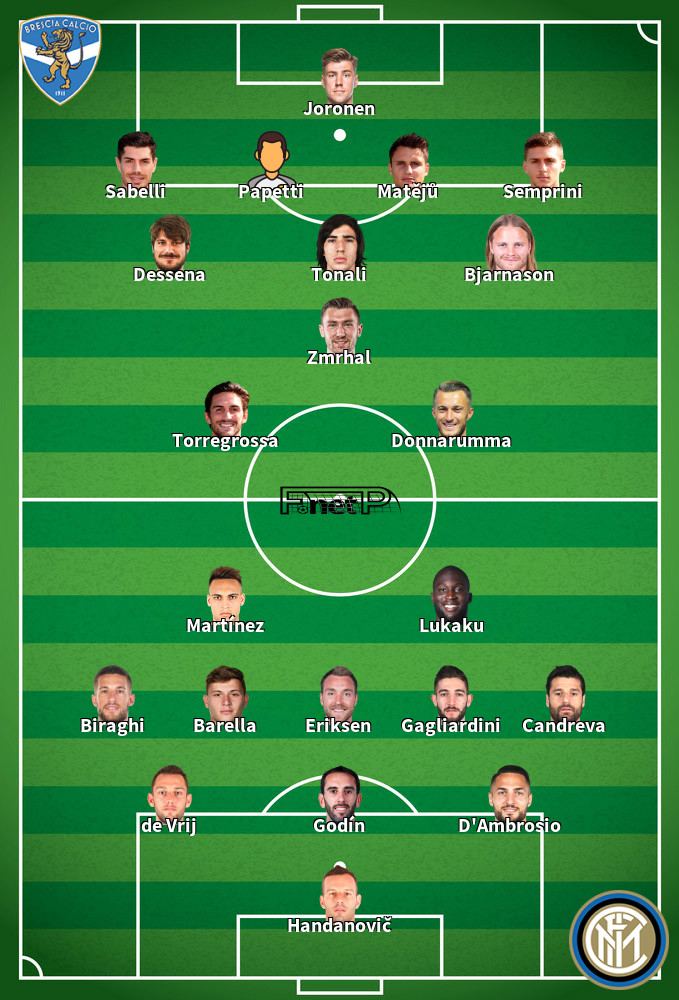 Customarily deployed in the Striker position, Romelu Lukaku was born in Antwerp, Belgium. Having played his first senior match for RSC Anderlecht in the 2009 - 2010 season, the goalscoring Forward has netted 19 league goals in this Serie A 2019 - 2020 season so far in a total of 27 appearances.

We have made these Inter Milan v Brescia predictions for this match preview with the best intentions, but no profits are guaranteed. Please always gamble responsibly, only with money that you can afford to lose. Best of luck.