KAA Gent take on visiting rivals Charleroi at Ghelamco Arena in this First Division A match on Thursday.

View all of the KAA Gent v Charleroi predictions, poll and stats below (inc. the best betting odds).

KAA Gent will be hoping for a repeat of their last result, following a 2-1 First Division A victory over KV Kortrijk.

In that game, KAA Gent had 43% possession and 15 shots at goal with 6 of them on target. The only player on the scoresheet for KAA Gent was Hugo Cuypers (7', 69'). For their opponents, Kortrijk got 12 shots on goal with 5 on target. Massimo Bruno (74') scored for KV Kortrijk.

An interesting theme in recent KAA Gent games is the number of results with a nil in them.

From their previous 6 matches before this one, in as many as 5 of them a wager on "Both Teams to Score" would've lost.

Looking at their past form shows that KAA Gent:

Charleroi come into this game after a 2-1 First Division A win vs Cercle Brugge in their previous game.

Looking at their form, and Charleroi have been scored against in 5 of their last 6 matches, conceding 11 goals in all. At the back, Charleroi have seen their frailties exposed. While that may be of interest, we will just have to wait and see whether the trend shall persist here in this match.

Looking over their prior head to head meetings going back to 10/04/2021 tells us that KAA Gent have won 2 of them & Charleroi 3, with the number of drawn games being 1.

A sum of 19 goals were produced between them in this period, with 11 of them from De Buffalo's and 8 coming from Les Zèbres. This gives an average number of goals per game equal to 3.17.

The last league fixture between the two was First Division A match day 7 on 04/09/2022 when the final score was Charleroi 2-1 KAA Gent.

In that match, Charleroi had 56% possession and 14 attempts on goal with 7 of them on target. The goalscorers were Ryota Morioka (37') and Adem Zorgane (73').

At the other end, KAA Gent got 9 attempts at goal with 1 of them on target. Hyeon-Seok Hong (22') scored.

From a largely healthy squad, there is only the lone fitness issue for the Charleroi boss Felice Mazzù to contend with. Nadhir Benbouali (Cruciate Ligament Rupture) won’t be playing here.

It looks to us that KAA Gent can get the win and a possible clean sheet when they play Charleroi, who may well struggle getting goals.

We’re predicting a comfortable 2-0 margin for KAA Gent by the time that the referee blows the final whistle. 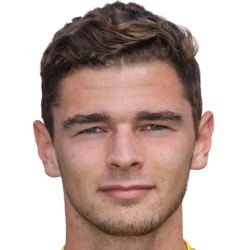 Normally deployed in the Striker position, Hugo Cuypers was born in Belgium. After having made a senior debut playing for AC Ajaccio in the 2019 - 2020 season, the skilful Forward has accumulated 9 league goals in the Pro League 2022 - 2023 season so far in 18 appearances.

While we have made these predictions for KAA Gent v Charleroi for this match preview with the best of intentions, no profits are guaranteed. Always gamble responsibly, and with what you can afford to lose.