All of our predictions, stats and the user poll for Colón v Vélez Sarsfield are shown below (inc. the best betting odds).

Colón are hoping to win again after their last result, a 2-1 Copa Libertadores success versus Cerro Porteno.

It’s not been often in recent games where Colón haven’t conceded. In fact, Colón have seen their defence breached in 5 of their previous 6 clashes, giving up 8 goals during that time. That kind of trend won’t necessarily be carried forward into this match, however.

Vélez Sarsfield have been effective going forward in the lead-up to this encounter, having scored 7 goals in their previous 6 matches. Having said that, Vélez Sarsfield can also improve defensively after being scored against in 5 of those same matches.

Looking at their past head-to-head clashes stretching back to 07/05/2016 shows that Colón have won 1 of these games & Vélez Sarsfield 4, with the tally of draws being 1.

A sum of 13 goals were shared by the two clubs throughout the course of those matches, with 4 from Los Sabaleros and 9 created by El Fortín. That’s an average goals per game figure of 2.17.

The last league fixture between these clubs was Superliga match day 5 on 08/08/2021 when it finished Vélez Sarsfield 0-1 Colón.

In that game, Vélez Sarsfield managed 55% possession and 5 attempts on goal with 0 on target.

For their opponents, Colón had 17 shots at goal with 5 of them on target. Facundo Farías (81') was the scorer.

The Colón manager Julio Falcioni will be thankful to have no fitness worries whatsoever ahead of this game with a fully injury-free squad available for selection.

Due to a completely healthy group to pick from, the Vélez Sarsfield boss Julio Vaccari does not have any fitness concerns to report before this clash.

When taking everything into account, Vélez Sarsfield might need a bit of good fortune to breach the defence of this Colón team who we reckon should get the win and a maybe even keep a clean sheet as well.

We therefore fancy a very even contest with a 1-0 advantage for Colón when all is said and done. 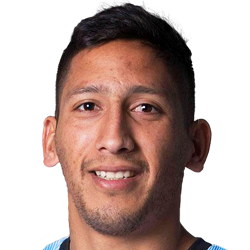 Mostly used in the Centre Midfield position, Rodrigo Aliendro was born in Merlo, Argentina. Having made a first senior appearance for Atlético Tucumán in the 2016 - 2017 season, the skilful Midfielder has managed 4 league goals in the Superliga 2021 campaign so far in a total of 23 appearances.

While we have made these predictions for Colón v Vélez Sarsfield for this match preview with the best of intentions, no profits are guaranteed. Always gamble responsibly, and with what you can afford to lose. Good luck!