Slaven Belupo play host to away side Dinamo Zagreb at Gradski Stadion u Koprivnici in this Prva Liga tie on Saturday.

View all of the Slaven Belupo v Dinamo Zagreb predictions, poll and stats below (plus the best game odds).

Slaven Belupo will be hoping to bounce back here following a 2-0 Prva Liga defeat last time out to Šibenik.

In that game, Slaven Belupo had 55% possession and 12 attempts at goal with 4 of them on target. Šibenik had 11 attempts on goal with 4 on target. Deni Jurić (8') and Mario Ćurić (13') scored for Šibenik.

It’s been all too rare in recent times that Slaven Belupo have shown defensive steel. The facts show that Farmaceuti have seen their defence breached in 5 of their previous 6 clashes, leaking 8 goals along the way. That pattern might not be carried forward into this next game, of course.

A look at their previous results shows us that Slaven Belupo:

Dinamo Zagreb come into this match following on from a 2-0 Prva Liga win as they beat Hajduk Split in their last match.

A run of outstanding displays from the Dinamo Zagreb defensive unit has resulted in their ‘goals against’ tally standing at 4 from their last 6 outings in total. In that time, their forwards have scored 7.

Going into this game, the form guide shows that Dinamo Zagreb:

A study of past results between these clubs stretching back to 05/10/2019 shows that these fixtures have been pretty painful for Slaven Belupo. They have not been able to get any wins whatsoever while Dinamo Zagreb have been dominant against them, running out winners in 83 per cent of those ties.

Those games weren’t short on goals, either, with 23 overall at an average of 3.83 goals per meeting.

The previous league contest between the two was Prva Liga match day 23 on 28/02/2021 when it ended Dinamo Zagreb 3-0 Slaven Belupo.

The match was refereed by Marin Vidulin.

Slaven Belupo manager Tomislav Stipić will be thankful to have no fitness worries to speak of ahead of this match with a completely healthy squad ready to go.

Out of a mainly full-strength squad, there’s only the sole fitness problem for the Dinamo Zagreb gaffer Damir Krznar to contend with. Mario Gavranovic (Muscle Injury) won’t be in action.

For this match, we think that Slaven Belupo have the firepower to get a goal against this Dinamo Zagreb lineup, but one goal is unlikely to prevent defeat.

Our tip is for a tight encounter finishing with a 1-2 victory for Dinamo Zagreb at the end of the match. There looks to be little in this one. 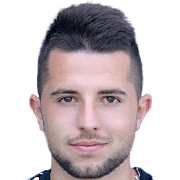 Generally played in the Centre Midfield position, Nemanja Glavčić was born in Serbia. Having played his first senior match for Slaven Belupo in the 2020 - 2021 season, the skilful Midfielder has hit 5 league goals in this Prva Liga 2020 - 2021 season to date in 30 appearances.

We have made these Slaven Belupo v Dinamo Zagreb predictions for this match preview with the best intentions, but no profits are guaranteed. Please always gamble responsibly, only with money that you can afford to lose. Good luck!