Royal Excel Mouscron are going up against away team Eupen at Stade Le Canonnier in this First Division A fixture on Sunday.

For all of our match predictions, pre-game poll and statistics for Royal Excel Mouscron v Eupen, scroll down (inc. the best betting odds).

Royal Excel Mouscron will be hoping to return to winning ways here after a 3-0 First Division A loss in their previous game against Oostende.

Royal Excel Mouscron have been quite ineffective in attack in more recent games. Their ‘goals for’ figure stands at just 2 vs opponents over the course of their previous 6 matches. In those meetings, Mouscron have also seen the tally of goals against them total 10.

Coming into this clash, Royal Excel Mouscron have not won at home in their last 4 league matches. Their fans aren't happy.

After tasting defeat last time out to Cercle Brugge in First Division A action, Eupen will be hoping to turn things around here.

The only name on the scoresheet from Eupen was Julien Ngoy (39'). Kylian Hazard (5') and Anthony Musaba (76') scored for Cercle Brugge.

Eupen have seen success in front of goal leading up to this encounter, scoring 7 times in their previous 6 matches. Having said that, Pandas have been somewhat leaky at the back, having also been scored against in 5 of those same outings. That kind of trend isn’t assured to be continued here, however.

Analysis of their past results shows that Eupen:

An examination of their past head to head meetings going back to 23/09/2017 shows us that Royal Excel Mouscron have won 2 of these games and Eupen 4, with the tally of drawn games standing at 0.

In all, 16 goals were scored between them in this period, with 6 of them from Mouscron and 10 being from Pandas. That is an average goals per game value of 2.67.

Royal Excel Mouscron manager Fernando Da Cruz has a full complement, with no fitness worries at all ahead of this game with a fully injury-free group available for selection.

With a fully injury-free group available to select from, Eupen boss Beñat San José has no fitness concerns to report before this game.

Here is a game where Royal Excel Mouscron may find it difficult to find the net against this Eupen team who should manage to get a goal of their own in a winning performance.

With that in mind, we reckon that it will be a very even match with a 0-1 advantage for Eupen at the end of this one.

Over/Under 2.5 Goals Prediction for Royal Excel Mouscron vs Eupen
Under 2.5 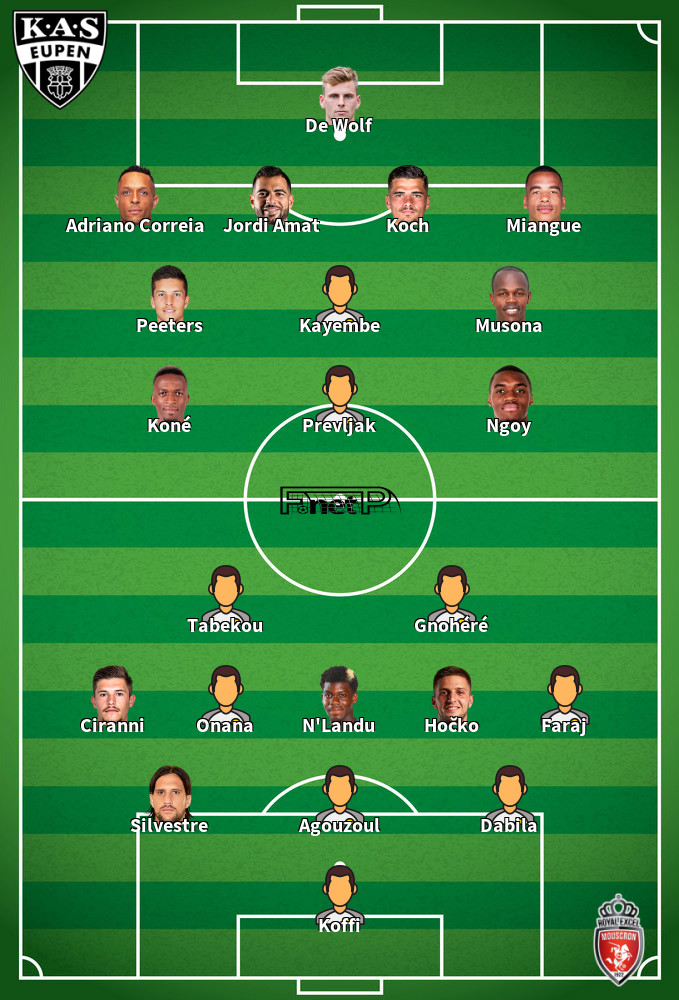 While we have made these predictions for Royal Excel Mouscron v Eupen for this match preview with the best of intentions, no profits are guaranteed. Always gamble responsibly, and with what you can afford to lose. Good luck with your selections.