Feyenoord will be at Hitachi Capital Mobility Stadion on Wednesday for the Eredivisie meeting with home team FC Groningen.

FC Groningen will play in this game after a 1-1 Eredivisie stalemate against SC Heerenveen.

The only name on the scoresheet from FC Groningen was Tomáš Suslov (82'). Siem de Jong (43') was the scorer for SC Heerenveen.

Danny Buijs's FC Groningen have seen rewards for their attempts on goal a sum total of 7 times over their past 6 outings. The comparative tally of goals that they have conceded in those same games amounts to 5.

Previously, Feyenoord drew 2-2 in the Eredivisie match with FC Twente.

In a total of 6 of the previous 6 games featuring Feyenoord, three or more goals have gone in. The overall average goals scored per match in that time is 4.67, with the average number of goals for Feyenoord working out to 2.5. In any event, time will tell whether such a trend will persist in this upcoming game.

Leading up to this clash, Feyenoord:

An examination of their past head to head meetings going back to 25/11/2017 shows us that FC Groningen have won 1 of these games and Feyenoord 4, with the number of drawn games being 1.

11 goals were shared by the two clubs during those clashes, with 2 from Trots van het Noorden and 9 belonging to De club aan de Maas. The average number of goals per game works out to 1.83.

The previous league encounter between the two was Eredivisie match day 8 on 08/11/2020 when it ended Feyenoord 2-0 FC Groningen.

We’ve got the feeling that FC Groningen will have their work cut out to breach the defence of this Feyenoord outfit who should score at least once to put them ahead.

That’s why our selection here is for a very even match with a 0-1 win for Feyenoord at the end of the 90 minutes. 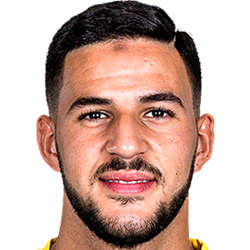 Regularly playing in the Central Defensive Midfielder position, Ahmed El Messaoudi was born in Belgium. After having played his first senior match for Lierse SK in the 2013 - 2014 season, the goalscoring Midfielder has contributed 6 league goals in this Eredivisie 2020 - 2021 season so far in a total of 18 appearances.

We have made these FC Groningen v Feyenoord predictions for this match preview with the best intentions, but no profits are guaranteed. Please always gamble responsibly, only with money that you can afford to lose.