This FC Utrecht v Feyenoord live stream video is set for broadcast on 10/04/2021. Soccer fans can watch the clash on a live streaming service if this match is featured in the schedule provided above. Here we provide useful information for watching this Eredivisie match including the most recent team form, h2h clashes and our match tips.

To watch the game via other methods, look up TV channel schedules in your place of residence. Such broadcasting contracts are generally distributed on a per-competition/league or even individual match arrangement basis. For fixtures shown live on regional television programmes, check the listings on channels such as BT Sport, Amazon Prime Video, Sky Sports, Now TV, iTV, Canal+, Fox Soccer, ESPN that are relevant for where you are.

When the abovementioned broadcaster is providing FC Utrecht v Feyenoord football live streaming service, you’ll be able to view the game on your mobile (iPhone, Android including Motorola) and desktop as well as tablet (eg iPad, Samsung Galaxy Tab).

After the match finishes, we may also provide a link to match highlights from time to time. We aren’t responsible for transmitting any match video content linked to from this site. All legal complaints must be done by contacting the hosters/owners of such content.

FC Utrecht will be taking on visiting side Feyenoord at Galgenwaard in the Eredivisie meeting on Sunday.

Our full set of predictions, statistics and match poll for FC Utrecht v Feyenoord can be seen below (plus the best game odds).

FC Utrecht, who won their previous game, will hope for a similar result following the 1-4 Eredivisie triumph against ADO Den Haag.

Fixtures featuring FC Utrecht have tended to be lively encounters lately with high scoring anticipated. Over their past half dozen games alone, the sum of 20 goals have flown in for both teams combined (at an average of 3.33 goals per game) with 14 of these belonging to Utreg. Let’s find out whether or not that trend will be sustained here.

Feyenoord will come into the meeting following a 2-0 Eredivisie win versus Fortuna Sittard in their most recent match.

Dick Advocaat's Feyenoord have managed to stick the ball in the net 12 times throughout their most recent six matches. The total of goals that have been scored against them during that period adds up to 6.

Coming into this contest, Feyenoord have not won away from home in their last 6 league matches.

A review of their prior head-to-head clashes dating back to 15/04/2018 tells us that FC Utrecht have won 1 of them & Feyenoord 3, with the tally of draws being 2.

A sum of 17 goals were scored between them in this period, with 7 of them for Utreg and 10 being from De club aan de Maas. That is an average goals per game value of 2.83.

The last league clash between the two was Eredivisie match day 10 on 29/11/2020 which finished with the scoreline of Feyenoord 1-1 FC Utrecht.

We think that Feyenoord will have to work hard as a team to see themselves scoring against this FC Utrecht side who we reckon should get the vital goal that wins it.

With that in mind, we reckon that it will be a 1-0 winning margin for FC Utrecht when the referee blows for full-time. 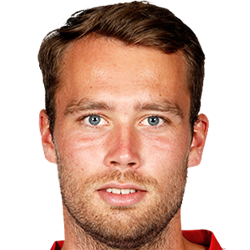 Typically deployed in the Central Attacking Midfielder position, Sander van de Streek was born in Netherlands. After having made a senior debut playing for SC Cambuur in the 2014 - 2015 season, the gifted Midfielder has managed 8 league goals in the Eredivisie 2020 - 2021 season to date coming from a total of 25 appearances.

We have made these FC Utrecht v Feyenoord predictions for this match preview with the best intentions, but no profits are guaranteed. Please always gamble responsibly, only with money that you can afford to lose.

⚽️ Where can I get the predictions for other Eredivisie matches?

Look at all of the next (and previous) Eredivisie predictions & previews here.