The Goias v Flamengo live stream video is set for 18/01/2021. Soccer fans can watch the fixture on a live streaming service if this match is featured in the schedule provided above. Here we give helpful information for watching this Serie A match including the most recent team form, head to head meetings and our game views.

To view the match using other sources, look up television schedules for your local region. Such broadcasting deals are generally distributed on a per-competition/league or even per-match basis. For matches shown live on regional tv programmes, check the schedules on channels including BT Sport, Amazon Prime Video, Sky Sports, Now TV, iTV, Canal+, Fox Soccer, ESPN depending on where you are.

When the abovementioned broadcaster has the rights to the Goias v Flamengo football live streaming coverage, you’ll be able to watch it on a mobile (iPhone, Android including Sony Xperia) and computer or tablet (eg iPad, Venturer).

Post-game, we might also link to game highlights from time to time. We aren’t responsible for transmitting any game video content linked to from here. All legal complaints must be done by contacting the hosters/owners of the content.

Goias come up against visiting rivals Flamengo at Estádio Hailé Pinheiro in this Serie A clash on Monday.

All Goias v Flamengo match predictions, user poll and stats are shown below - along with the latest match odds.

Goias will be hoping for a better result after the 1-0 Serie A losing effort in their last game against Internacional.

Their latest results really do illustrate the point that not much more can be done by the Goias backline. Verdão have been stingy, seeing the total number of goals that have gone past their goalkeeper during their past 6 games standing at 4.

Analysis of their past results shows that Goias:

Since a losing effort in their last game against Ceará in Serie A competition, Flamengo and their fans will hope to get a better result this time.

In that match, Flamengo had 74% possession and 21 attempts at goal with 5 of them on target. On the other side, Ceará had 8 attempts on goal with 4 on target. Vinícius Goes (13') and Kelvyn (90') scored for Ceará.

Rogério Ceni's Flamengo have converted 10 times in the course of their previous six matches. The total of goals that have been scored against them during those same matches comes to 8.

Checking on their prior head-to-head meetings going back to 11/09/2014 shows us that Goias have won 1 of these and Flamengo 4, with the number of draws being 1.

A total of 21 goals were shared by the two clubs during those clashes, with 6 of them for Verdão and 15 for Fla. The average goals per game has been 3.5.

Goias manager Augusto César will be happy not to have any fitness concerns whatsoever before this match owing to a completely injury-free group available for selection.

Flamengo boss Rogério Ceni has multiple availability issues to deal with. Thiago Maia (Corona virus) and Diego Alves (Muscle Injury) can’t be considered. Gerson will not be able to play in this game through being suspended.

When taking all factors into account, Goias should be able to score against this Flamengo side, although just one goal likely won’t be enough to avoid a loss.

Our tip is for a tight encounter finishing with a 1-2 winning score for Flamengo at the end of the match. It really should be an interesting one. 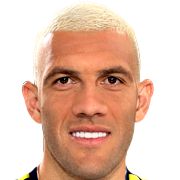 Typically deployed in the Striker position, Fernandão was born in Rio de Janeiro, Brazil. After having made a senior debut playing for Flamengo in the 2008 season, the goalscoring Forward has netted 4 league goals in the Série A 2020 campaign to date in a total of 16 appearances.

While we have made these predictions for Goias v Flamengo for this match preview with the best of intentions, no profits are guaranteed. Always gamble responsibly, and with what you can afford to lose. Good luck if you do place a bet today.

⚽️ Where can I get the previews for other Serie A games?

You can see all of our next (and previous) Serie A predictions & previews here.