The League One fixture at Highbury Stadium on Tuesday sees home side Fleetwood Town welcome Portsmouth.

Fleetwood Town will be hoping for a better result following a 1-0 League One defeat in their last game at the hands of Sheffield Wednesday.

Marvin Johnson (17') was the scorer for Sheffield Wednesday.

It’s been a rare occasion in recent games where Fleetwood Town have managed to hold out for a full 90 minutes. It will be a concern for them that Fleetwood Town have failed to prevent opponents from scoring in 5 of their previous 6 matches, giving up 8 goals on the way. Such a pattern isn’t assured to be sustained into this match, though.

Looking at their past form shows that Fleetwood Town:

Portsmouth head into the encounter following on from a 2-0 League One win to beat Exeter City in their most recent fixture.

Looking at their form, and Portsmouth have been scored against in 5 of their last 6 games, seeing opposing sides hit 10 goals in total. In defence, Portsmouth have seen their frailties exposed.

Their past results show that Portsmouth:

Looking over their past head to head clashes dating back to 10/03/2020 shows us that Fleetwood Town have won 0 of these & Portsmouth 2, with the number of drawn matches being 4.

An aggregate of 14 goals were yielded between them in these games, with 6 of them for The Fishermen and 8 coming from Pompey. That is an average goals per game value of 2.33.

The last league game featuring these sides was League One match day 14 on 08/10/2022 when it finished Portsmouth 1-1 Fleetwood Town.

Owing to an otherwise available group of players, there’s just the one fitness problem for the Portsmouth gaffer Simon Bassey to contend with. Jayden Reid (Knee Injury) won’t be playing here.

We’ve got the feeling that Fleetwood Town will have their work cut out to score against this Portsmouth team who we think might win and very possibly keep a clean sheet.

We’re therefore expecting a very competitive encounter with a 0-1 winning margin for Portsmouth when the referee blows for full-time. 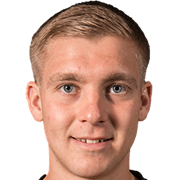 Typically playing in the Centre Midfield position, Daniel Batty was born in England. After having played his first senior match for Halifax in the 2017 - 2018 season, the goalscoring Midfielder has contributed 3 league goals in the League One 2022 - 2023 season so far coming from a total of 22 appearances.

We have made these Fleetwood Town v Portsmouth predictions for this match preview with the best intentions, but no profits are guaranteed. Please always gamble responsibly, only with money that you can afford to lose. Best of luck with your selections.