Palermo arrive at Stadio Benito Stirpe on Saturday for the Serie B meeting with hosts Frosinone.

Our predictions, user poll and statistics for Frosinone v Palermo can be found here - plus the latest match odds.

Frosinone, following on from their previous result, will be hoping for more of the same after a 1-0 Serie B success against Palermo.

In that match, Frosinone had 57% possession and 5 attempts on goal with 1 of them on target. The only player on the scoresheet for Frosinone was Luca Moro (44'). At the other end, Palermo got 3 attempts at goal with 1 on target.

In their prior 6 games, Fabio Grosso's Frosinone have seen rewards for their attempts on goal a combined total of 9 times, an average number of goals per match of 1.5.

Going into this contest, Frosinone are unbeaten in their previous 2 home league matches.

In the course of their 6 most recent matches, Eugenio Corini's Palermo have slotted home a total of 6 times thus earning them the goals scored per game average of 1.

Heading into this contest, Palermo have not won away from home in their last 2 matches in the league.

Looking at their past head-to-head meetings stretching back to 12/12/2015 shows that Frosinone have won 1 of them and Palermo 4, with the number of drawn games being 1.

A combined sum of 13 goals were scored between the two sides in this period, with 4 for Canarini and 9 for Rosaneri. The average number of goals per game works out to 2.17.

The previous league meeting between these clubs was Serie B match day 6 on 17/09/2022 which finished with the scoreline of Frosinone 0-0 Palermo.

The Frosinone manager Fabio Grosso will be grateful to have no fitness concerns whatsoever ahead of this game thanks to a fully healthy squad available for selection.

With a completely injury-free squad to choose from, the Palermo manager Eugenio Corini does not have any fitness concerns to report before this game.

Palermo will surely be able to score against this Frosinone team, although it possibly won’t be enough to avoid a loss.

Our selection here is for a close game with a 2-1 winning margin for Frosinone by the time that the referee blows the final whistle. It really should be an interesting one. 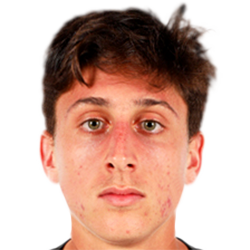 Generally playing in the Striker position, Samuele Mulattieri was born in La Spezia, Italy. After having made a senior debut playing for Spezia in the 2017 - 2018 season, the goalscoring Forward has bagged 2 league goals in the Serie B 2022 - 2023 campaign so far from a total of 5 appearances.

While we have made these predictions for Frosinone v Palermo for this match preview with the best of intentions, no profits are guaranteed. Always gamble responsibly, and with what you can afford to lose. Good luck with your selections.