Leeds United will be taking on away side Fulham at Elland Road in this Premier League tie on Saturday.

Scroll down for all of our predictions, poll and stats for the Leeds United v Fulham game - plus the latest match odds.

In that game, Leeds United managed 65% possession and 8 attempts at goal with 2 of them on target. The only player to score for Leeds United was Ezgjan Alioski (90'). For their opponents, Hull City got 19 shots on goal with 7 on target. Mallik Wilks (5') scored for Hull City.

Leeds United haven’t been able to stop scoring goals, netting in each and every one of their last 6 matches.

They have hit an aggregate of 13 during that period while seeing the number of goals scored against them stand at 6.

Coming into this contest, Leeds United are unbeaten in their previous 8 league matches at home. A run that they'll hope to extend here.

Fulham come into this match after a 0-1 EFL Cup win in the defeat of Ipswich Town in their last match.

In that game, Fulham had 69% possession and 15 attempts at goal with 6 on target. The only player on the scoresheet for Fulham was Aleksandar Mitrović (38'). Ipswich Town got 5 shots on goal with 1 on target.

Scott Parker's Fulham have seen their efforts on goal rewarded 7 times throughout their previous 6 matches. The total of goals that have been scored against them during those matches equals 7.

Analysis of their past results shows that Fulham:

Looking at their most recent head to head clashes dating back to 16/08/2016 shows that Leeds United have won 1 of these games and Fulham 2, with the number of drawn results standing at 3.

A sum of 12 goals were yielded between them throughout the course of those matches, with 6 from The Whites and 6 created by The Cottagers. The average number of goals per game works out to 2.

The previous league game between these sides was Championship match day 39 on 27/06/2020 when it finished Leeds United 3-0 Fulham.

At the other end, Fulham got 12 shots at goal with 5 on target.

With a fully injury-free squad to pick from, Fulham boss Scott Parker doesn’t have any fitness worries whatsoever before this clash.

We feel that Leeds United will probably convert a lot of goal-scoring opportunities.

In contrast, Fulham may well struggle to get a goal of their own although we do reckon that they could well end up managing to get on the scoresheet, too.

We’re tipping a decent 3-1 margin for Leeds United by the time that the referee blows the final whistle.

Both Teams to Score Prediction for Leeds United vs Fulham
Yes 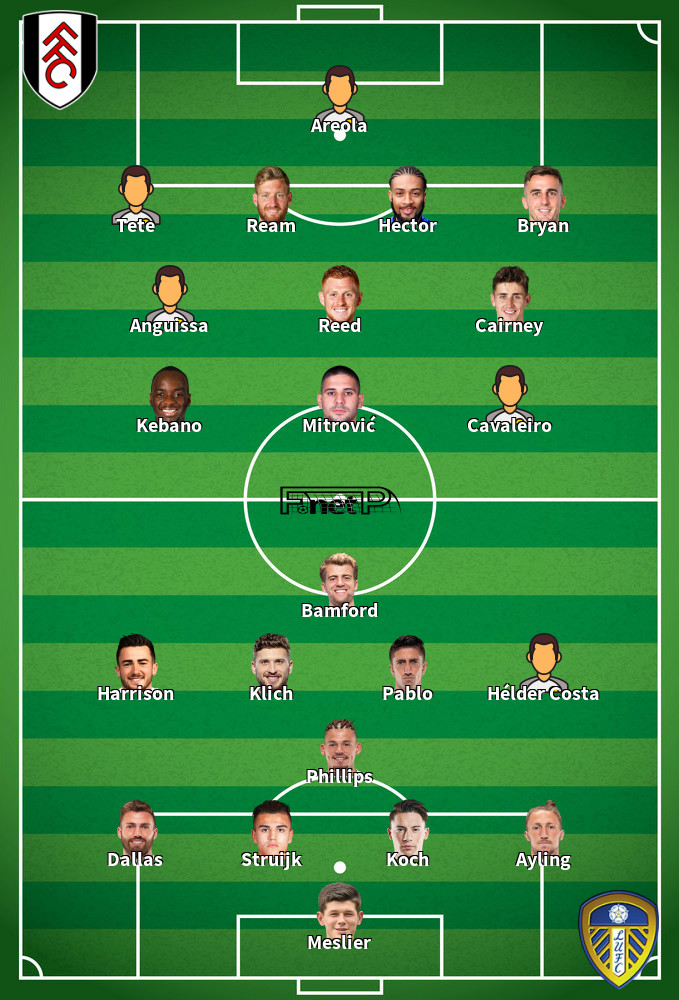 While we have made these predictions for Leeds United v Fulham for this match preview with the best of intentions, no profits are guaranteed. Always gamble responsibly, and with what you can afford to lose. Best of luck.

⚽️ Where can I see the odds for other Premier League matches?

Look at all of our next (and previous) Premier League predictions & previews here.