Halmstads BK will be visiting Skarsjövallen on Saturday for the Superettan tie with home side Ljungskile SK.

Our full set of predictions, statistics and match poll for Ljungskile SK v Halmstads BK can be seen below - as well as up-to-date odds.

Ljungskile SK will play in this fixture following a 1-1 Superettan stalemate vs GAIS.

The only scorer from Ljungskile SK was Jesper Westermark (23'). Mervan Çelik (33') was the scorer for GAIS.

It has been seldom in recent games that Ljungskile SK have shown defensive steel. The facts show that LSK have seen their defence breached in 6 of their previous 6 matches, shipping 13 goals along the way. We will have to see whether or not that trend can be sustained in this game.

Heading into this contest, Ljungskile SK haven’t won at home in the past 2 matches in the league.

Halmstads BK head into the meeting after a 2-3 Superettan win against Västerås SK in their most recent game.

In the course of their 6 most recent matches, Magnus Haglund's Halmstads BK have had reason to celebrate scoring a total of 11 times thus giving them a goals scored per game average of 1.83.

Coming into this clash, Halmstads BK are undefeated in their previous 6 away league matches.

A study of their past head to head meetings stretching back to 08/05/2008 tells us that these fixtures have ended in disappointment for Ljungskile SK. They have not managed to register any victories whatsoever whereas Halmstads BK have just been stronger than them, winning in 83% of those match-ups.

A total of 11 goals were produced between them in this period, with 2 of them from LSK and 9 belonging to HBK. That’s an average goals per game of 1.83.

The last league clash featuring these clubs was Superettan match day 17 on 30/07/2016 which finished with the scoreline of Ljungskile SK 0-1 Halmstads BK.

Ljungskile SK manager Jörgen Wålemark doesn’t have any fitness concerns at all coming into this match with a fully healthy squad available for selection.

In an otherwise available group, there’s just the one fitness problem for the Halmstads BK gaffer Magnus Haglund to be concerned about. Viktor Ljung (Cruciate Ligament Injury) misses out for this game.

In our view, Ljungskile SK will surely be able to breach the defence of this Halmstads BK team, although just one goal might not be enough to avoid a loss.

Therefore, we’re predicting both teams to score in a 1-2 winning score for Halmstads BK when the referee blows the final whistle. Should be a good one. 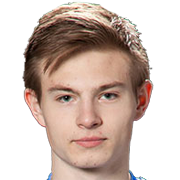 Regularly taking to the field in the Centre Midfield position, Linus Dahl was born in Sweden. Having made a first senior appearance for Ljungskile SK in the 2015 season, the goalscoring Midfielder has managed 2 league goals in this Superettan 2020 season to date in 8 appearances.

We have made these Ljungskile SK v Halmstads BK predictions for this match preview with the best intentions, but no profits are guaranteed. Please always gamble responsibly, only with money that you can afford to lose. Best of luck with your selections.