Harrogate Town enter this match following on from a 1-1 League Two drawn result against Stevenage.

The only player to score from Harrogate Town was Luke Armstrong (77'). Carl Piergianni (60') scored for Stevenage.

Harrogate Town have not been the best at stopping their opponents lately, but they’ve also managed to hit the back of the net themselves. Looking at their last 6 games, Harrogate Town have been punished defensively in 6 of them while also managing to get on the scoresheet in 5 of those matches.

Following on from being beaten in their last game against Salford City in League Two action, Sutton United will be aiming to make amends here.

The stats tell the story, and Sutton United have been scored against in 6 of their last 6 matches, with opponents netting 9 goals in all. At the back, Sutton United have not been doing too well. We will just have to see whether or not that trend can be sustained here.

A glance at their prior head-to-head meetings dating back to 28/09/2019 tells us that Harrogate Town have won 1 of them & Sutton United 5, with the tally of drawn games being 0.

In all, 13 goals were scored between them during those clashes, with 4 of them for The Town and 9 coming from The U's. That’s an average goals per game figure of 2.17.

The previous league fixture between these clubs was League Two match day 7 on 03/09/2022 when it ended Sutton United 2-1 Harrogate Town.

The referee was Neil Hair.

The Harrogate Town manager Simon Weaver will be grateful to have no fitness concerns whatsoever before this match owing to a completely injury-free squad to pick from.

Owing to a fully healthy group available to choose from, the Sutton United manager Matt Gray does not have any fitness concerns whatsoever ahead of this clash.

We feel that over the course of the game, Harrogate Town may find it difficult to break down this Sutton United lineup who we think will get the win and a maybe even keep a clean sheet as well.

Therefore, we predict a good battle with a 0-1 victory for Sutton United after 90 minutes. 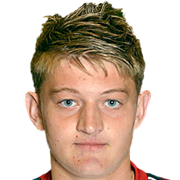 Mostly played in the Striker position, Luke Armstrong was born in Durham, England. Having played his first senior match for Cowdenbeath in the 2015 - 2016 season, the accomplished Forward has accumulated 10 league goals in the League Two 2022 - 2023 season so far in 25 appearances.

While we have made these predictions for Harrogate Town v Sutton United for this match preview with the best of intentions, no profits are guaranteed. Always gamble responsibly, and with what you can afford to lose. Best of luck with your selections.