Sampdoria will be facing guests Hellas Verona at Stadio Luigi Ferraris in the Serie A game on Saturday.

For all of our match predictions, pre-game poll and statistics for Sampdoria v Hellas Verona, scroll down - plus the latest match odds.

Sampdoria are hoping to win again after their last result, the 0-2 Serie A victory over Salernitana.

In that game, Sampdoria managed 46% possession and 13 shots at goal with 6 on target. The scorer for Sampdoria was Antonio Candreva (43'). Salernitana had 18 attempts on goal with 2 on target. Francesco Di Tacchio (40' Own goal) scored for Salernitana.

At least three goals per match were recorded in 5 of the past 6 fixtures where Sampdoria have played. Opposing sides scored 12 times in these games whereas Sampdoria totted up 7. Nonetheless, we must now wait to see whether such a trend shall be sustained in this match or not.

Going into this game, the form guide shows that Sampdoria:

Hellas Verona come into this game after a 2-1 Serie A win versus Empoli in their previous outing.

In that match, Hellas Verona managed 57% possession and 22 shots on goal with 5 on target. For Hellas Verona, the goalscorers were Antonín Barák (49') and Adrien Tameze (91'). For their opponents, Empoli got 9 attempts at goal with 4 of them on target. Simone Romagnoli (67') was the scorer for Empoli.

Illustrating their penchant for high-scoring matches, goals have been celebrated 20 times in the last six matches in which Hellas Verona have taken to the pitch, yielding a mean average of 3.33 goals for each fixture. Opposition teams have got 8 from this total.

A glance at their prior head to head clashes dating back to 20/09/2017 shows that Sampdoria have won 4 of these games & Hellas Verona 1, with the number of drawn results standing at 1.

In all, 14 goals were shared by the two clubs throughout the course of those matches, with 9 of them from i Blucerchiati and 5 created by Verona. That’s an average goals per game of 2.33.

The previous league meeting between the two was Serie A match day 31 on 17/04/2021 when the final score was Sampdoria 3-1 Hellas Verona.

On that occasion, Sampdoria had 49% possession and 12 attempts at goal with 5 of them on target. Goals were scored by Jakub Jankto (46'), Manolo Gabbiadini (73') and Morten Thorsby (82').

On the other side, Hellas Verona had 19 shots at goal with 5 of them on target. Darko Lazović (13') was the scorer.

The Sampdoria boss Roberto D'Aversa does not have any fitness concerns to speak of ahead of this match with a completely healthy group ready to go.

Thanks to a fully healthy squad to pick from, the Hellas Verona boss Igor Tudor doesn’t have any fitness worries to report before this clash.

Hellas Verona and Sampdoria should play out a closely-fought contest here.

Will be interesting to see how this one goes, with a good chance of a draw. We therefore think that it’s going to be a close game with a 1-1 scoreline at the end of the 90 minutes. 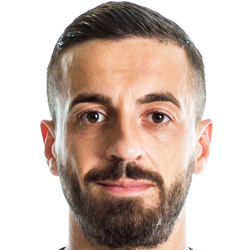 Customarily deployed in the Striker position, Francesco Caputo was born in Italy. Having made his senior debut playing for AS Bari in the 2008 - 2009 season, the talented Forward has managed to score 3 league goals in the Serie A 2021 - 2022 season to date in 13 appearances.

While we have made these predictions for Sampdoria v Hellas Verona for this match preview with the best of intentions, no profits are guaranteed. Always gamble responsibly, and with what you can afford to lose. Best of luck.