Pogon Szczecin will be facing visiting opponents Jagiellonia Białystok at Stadion Miejski Floriana Krygiera in this Ekstraklasa fixture on Sunday.

Scroll down for all of our predictions, poll and stats for the Pogon Szczecin v Jagiellonia Białystok game - plus the latest betting odds.

Pogon Szczecin will be looking for an improved result here after a 4-0 Conference League Qualifiers loss in their previous game against Brøndby IF.

Taking a look at their past results, Pogon Szczecin:

Since suffering a loss in their previous game against Widzew Łódź in Ekstraklasa action, Jagiellonia Białystok will be aiming to make amends here.

In 5 of the previous six clashes featuring Jagiellonia Białystok, a comparatively low number of goals have been struck between them and their opposition. The overall average number of goals per game in that spell works out to a meagre 1.83, with the average goals for Jagiellonia standing at 1. That kind of pattern won’t necessarily be sustained into this game, though.

Going into this game, the form guide shows that Jagiellonia Białystok:

Looking over their most recent head to head meetings going back to 03/03/2020 shows us that Pogon Szczecin have won 4 of these games and Jagiellonia Białystok 1, with the number of drawn matches standing at 1.

A combined sum of 19 goals were produced between them during those clashes, with 13 of them from Pogoń and 6 created by Jagiellonia. That is an average goals per game value of 3.17.

The last league clash featuring the two was Ekstraklasa match day 29 on 16/04/2022 when the final score was Jagiellonia Białystok 1-2 Pogon Szczecin.

That day, Jagiellonia Białystok had 41% possession and 7 shots at goal with 1 of them on target. Their only player on the scoresheet was Diego Carioca (25').

At the other end, Pogon Szczecin had 15 attempts on goal with 7 of them on target. Kamil Grosicki (34') and Kamil Drygas (73') scored.

The referee was Damian Kos.

The Pogon Szczecin boss Jens Gustafsson doesn’t have any fitness concerns to speak of before this game thanks to a completely healthy squad available to choose from.

Thanks to a fully injury-free group available to choose from, the Jagiellonia Białystok boss Maciej Stolarczyk has zero fitness worries at all ahead of this game.

In our opinion, Pogon Szczecin should dominate possession and create several successful chances.

Conversely, Jagiellonia Białystok could well struggle to score but we do think that it’s more than likely that they will be getting the chances to score, too.

Our selection here is for a 3-1 margin for Pogon Szczecin at full-time. 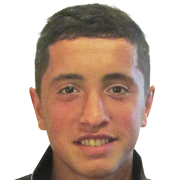 Customarily taking to the field in the Central Attacking Midfielder position, Vahan Bichakhchyan was born in Gyumri, Armenia. After having played his first senior match for MŠK Žilina in the 2017 - 2018 season, the gifted Midfielder has scored 2 league goals in this Ekstraklasa 2022 - 2023 campaign so far coming from a total of 2 appearances.

While we have made these predictions for Pogon Szczecin v Jagiellonia Białystok for this match preview with the best of intentions, no profits are guaranteed. Always gamble responsibly, and with what you can afford to lose. Best of luck with your selections.