Scroll down for all of our predictions, poll and stats for the Wisła Kraków v Lechia Gdańsk game - plus the latest match odds.

Wisła Kraków will want to continue from where they left off last time out with a 1-0 Ekstraklasa victory vs Legia Warsaw.

In that match, Wisła Kraków managed 48% possession and 9 attempts at goal with 5 on target. The only player on the scoresheet for Wisła Kraków was Felicio Brown Forbes (29'). At the other end, Legia Warszawa had 5 shots on goal with 3 on target.

Wisła Kraków haven’t had any problems with scoring, hitting the target in each and every one of their last 6 matches.

They’ve totted up the amount of 11 during that time while also conceding a total of 7.

Ahead of this clash, Wisła Kraków have not beaten Lechia Gdańsk in their previous 5 league games.

In their previous fixture, Lechia Gdańsk drew 2-2 in the Ekstraklasa match with Radomiak Radom.

For Lechia Gdańsk, the scorers were Mateusz Żukowski (12') and Maciej Gajos (19'). Luís Machado (59') and Karol Angielski (64') scored for Radomiak Radom.

Throughout their six most recent matches, Lechia Gdańsk have managed to stick the ball in the net a total of 8 times, yielding them the goals per game average of 1.33.

Checking on their most recent head to head clashes stretching back to 15/09/2018 shows that Wisła Kraków have won 1 of these and Lechia Gdańsk 4, with the number of drawn matches being 1.

A total of 15 goals were shared by the two clubs during those clashes, with 6 of them from Biała Gwiazda and 9 belonging to Gdańsk. This gives an average number of goals per game equal to 2.5.

The last league contest between these clubs was Ekstraklasa match day 21 on 13/03/2021 when it ended Lechia Gdańsk 2-0 Wisła Kraków.

The match was refereed by Jarosław Przybył.

The Wisła Kraków boss Adrián Guľa will be thankful to have no fitness concerns whatsoever before this match owing to a completely injury-free group available to choose from.

With a fully injury-free group available to select from, the Lechia Gdańsk manager has zero fitness concerns to speak of before this game.

Lechia Gdańsk will have to perform well to be putting a goal past this Wisła Kraków lineup who we think might well manage to score & go ahead.

With that in mind, we reckon that it will be a good battle with a 1-0 winning score for Wisła Kraków when the referee blows for full-time. 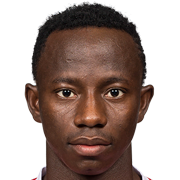 Normally deployed in the Right Attacking Midfielder position, Yaw Yeboah was born in Accra, Ghana. After having made a senior debut playing for Lille in the 2015 - 2016 season, the gifted Midfielder has hit 3 league goals in this Ekstraklasa 2021 - 2022 season to date in a total of 6 appearances.

We have made these Wisła Kraków v Lechia Gdańsk predictions for this match preview with the best intentions, but no profits are guaranteed. Please always gamble responsibly, only with money that you can afford to lose. Good luck!