Levante visit Estadio de Mestalla on Sunday for the La Liga fixture with home side Valencia.

Our tips, poll and stats for Valencia v Levante can all be found here - as well as the best betting odds.

Valencia will be hoping to return to winning ways here after the 1-0 La Liga defeat last time out to Seville.

It has been all too rare in recent times where Valencia have managed to hold out for a full 90 minutes. In fact, Los Che have failed to prevent opponents from scoring in 5 of their previous 6 clashes, giving up 7 goals during that time. Let’s see whether or not that trend will be sustained in this game.

Levante head into the meeting after a 1-0 La Liga win with the defeat of Getafe in their most recent game.

In the course of their 6 previous matches, Paco López's Levante have found the back of the net 6 times therefore yielding them a goals per game average of 1.

A review of their prior head to head meetings going back to 16/09/2017 shows that Valencia have won 3 of these games & Levante 0, with the number of drawn results being 3.

There were also plenty of goals scored in those games, 22 in total at an average of 3.67 goals per meeting.

The previous league fixture featuring these sides was LaLiga match day 28 on 12/06/2020 when it finished Valencia 1-1 Levante.

That day, Valencia had 50% possession and 11 shots at goal with 2 of them on target. The scorer was Rodrigo Moreno (89').

Levante had 12 attempts on goal with 4 on target. Gonzalo Melero (98') scored.

The match was refereed by Javier Alberola Rojas.

Availability isn’t a big problem, with just one fitness concern for the Valencia manager Javi Gracia to be concerned with from an otherwise fully-primed group. Mouctar Diakhaby (Ankle Injury) misses out.

Levante boss Paco López has a number of players out of action. Roger Martí (Sprained ankle) and Cheick Doukouré (Achilles tendon rupture) are not ready for selection.

We believe that Levante should be able to breach the defence of this Valencia outfit, although it is unlikely to be enough to avoid a loss.

We’re expecting a very close game with a 2-1 victory for Valencia by the conclusion of the game. Looking forward to this.

Both Teams to Score Prediction for Valencia vs Levante
Yes 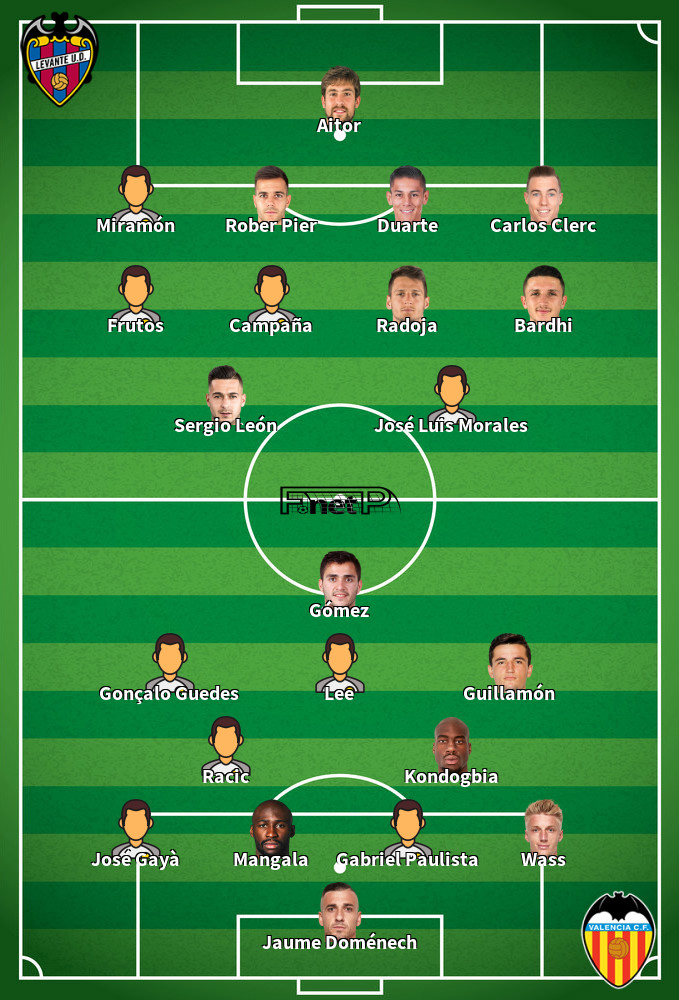 We have made these Valencia v Levante predictions for this match preview with the best intentions, but no profits are guaranteed. Please always gamble responsibly, only with money that you can afford to lose. Good luck!