Return to this page a few days before the scheduled game when this expired prediction will be updated with our full preview and tips for the next match between these teams.
Luton Town journey to Liberty Stadium on Saturday for the Championship fixture with hosts Swansea City. View all Swansea City v Luton Town tips, stats and our pre-match poll below - along with the latest match odds.

Swansea City will be looking for a repeat result of the 0-3 Championship triumph vs Middlesbrough. In that match, Swansea City had 46% possession and 13 shots on goal with 3 of them on target. For Swansea City, the goalscorers were Rhian Brewster (18', 21') and André Ayew (34'). For their opponents, Middlesbrough got 17 shots at goal with 1 on target.

Matches featuring Swansea City have proved to be entertaining affairs recently with high scoring anticipated. Over their past six games alone, the sum total of 20 goals have been scored for both sides combined (at an average of 3.33 goals per game) with 12 of them coming from The Swans.

Analysis of their past results shows that Swansea City:

In the course of their 6 most recent matches, Nathan Jones's Luton Town have slotted home 6 times therefore yielding them a goals scored per game average of 1.

Heading into this fixture, Luton Town are without an away win for the past 2 matches in the league.

If we look at their past head to head meetings stretching back to 17/02/2001, there has been little between the sides with Swansea City winning 3 of those games, Luton Town 3 and 0 being drawn in normal time.

A total of 21 goals were scored between the two sides during those clashes, with 9 for The Swans and 12 being from The Hatters. The average number of goals per game works out to 3.5.

The previous league clash featuring the two was Championship match day 23 on 21/12/2019 which finished with the scoreline of Luton Town 0-1 Swansea City. On that occasion, Luton Town had 44% possession and 14 shots at goal with 1 of them on target. For their opponents, Swansea City had 20 shots on goal with 4 on target. André Ayew (82') scored. The match was refereed by David Webb.

Swansea City boss Steve Cooper has no fitness concerns whatsoever coming into this game owing to a completely healthy squad available to select from.

With a fully healthy squad to pick from, Luton Town boss Nathan Jones does not have any fitness concerns at all coming into this clash.

We believe that Luton Town should get enough chances to find the net against this Swansea City lineup, however it is unlikely to be enough to avoid a loss. Our selection here is for both teams to score in a 2-1 advantage for Swansea City by the conclusion of the game. Expecting it to be very competitive. 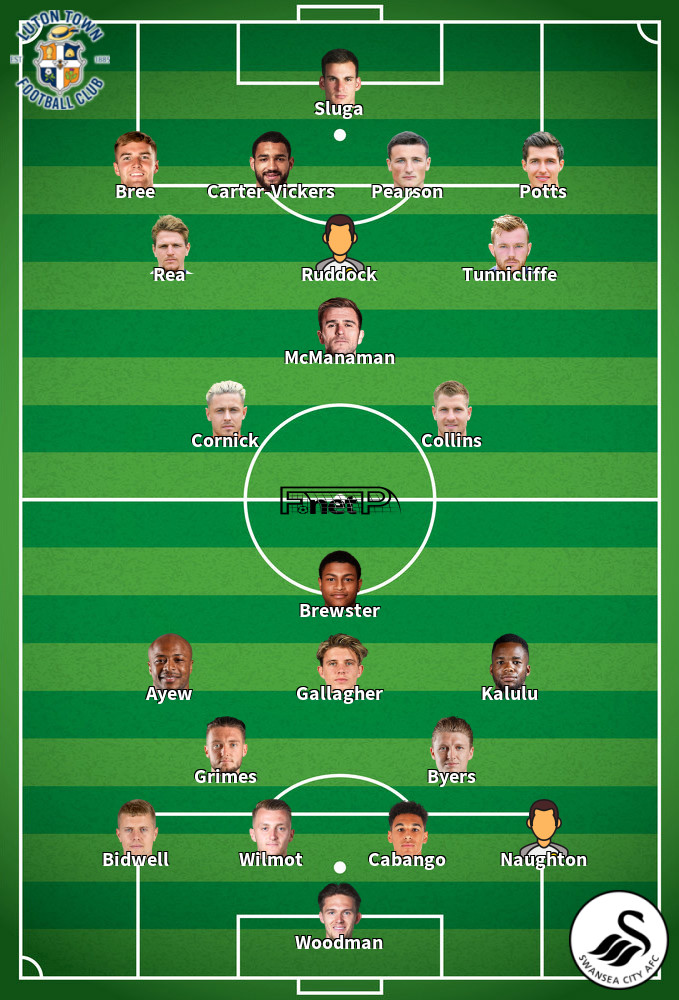 Customarily playing in the Left Wing position, André Ayew was born in Seclin, France. Having made a first senior appearance for Marseille in the 2007 - 2008 season, the gifted Forward has struck 13 league goals in this Championship 2019 - 2020 season to date in 36 appearances.

While we have made these predictions for Swansea City v Luton Town for this match preview with the best of intentions, no profits are guaranteed. Always gamble responsibly, and with what you can afford to lose. Good luck!