Monza make the trip to Stadio Ennio Tardini on Sunday for the Serie B game with home team Parma.

Our full set of predictions, statistics and match poll for Parma v Monza can be seen below (including the best match odds).

Parma prepare for this match coming off the back of a 2-2 Serie B tied result against SPAL.

In that game, Parma managed 44% possession and 11 attempts on goal with 3 of them on target. For Parma, the goals were scored by Gennaro Tutino (27') and Franco Vázquez (67'). At the other end, SPAL got 27 shots at goal with 9 of them on target. Federico Viviani (81') and Lorenzo Colombo (90') scored for SPAL.

Parma have been on a persistent run of goalscoring form, netting in one hundred percent of their last 6 matches.

They have totted up the amount of 10 during that time while also conceding a total of 8.

Coming into this clash, Parma haven’t won at home in the past 2 league games.

Following on from being defeated in their last game at the hands of Lecce in Serie B competition, Monza will be hoping to turn things around here.

The numbers tell their own story, and Monza have been scored against in 5 of their last 6 games, conceding 8 goals overall. In defence, Monza have clearly had some problems. Having said that, time will tell if such a trend will be replicated here in this match.

Coming into this contest, Monza are without a win away from home in their last 4 league games.

There is just the sole fitness concern for the Parma gaffer Enzo Maresca to contend with from of an almost fully healthy set of players. Adrián Bernabé (Surgery) will miss out. Franco Vázquez is ineligible for this match because of suspension.

Owing to a fully injury-free group to choose from, the Monza boss Giovanni Stroppa does not have any fitness worries to speak of before this clash.

In our view, Monza will need to push hard to be putting a goal past this Parma side who we reckon should score at least once to put them ahead.

We’re therefore expecting a very even contest with a 1-0 win for Parma when all is said and done. 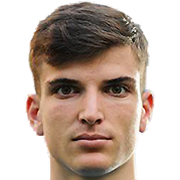 Regularly played in the Left Attacking Midfielder position, Valentin Mihăilă was born in Finta, Romania. After having played his first senior match for Parma in the 2020 - 2021 season, the goalscoring Midfielder has got 2 league goals in the Serie B 2021 - 2022 season to date in 6 appearances.

We have made these Parma v Monza predictions for this match preview with the best intentions, but no profits are guaranteed. Please always gamble responsibly, only with money that you can afford to lose.