Telstar go into this fixture following on from a 0-0 Eerste Divisie stalemate against FC Dordrecht.

Telstar have really been misfiring in recent times. Their sum of goals equals just 4 versus opponents during their last 6 fixtures. In those games, Telstar have also seen the tally of goals against them come to 8. That kind of trend isn’t assured to be continued into this next game, of course.

Going into this one, Telstar haven't been defeated in their previous 5 home league matches.

After tasting defeat last time out to ADO Den Haag in Eerste Divisie competition, MVV and their fans will hope to get a better result this time.

In a total of 5 of the previous 6 clashes involving MVV, three or more goals have been struck. The average goals scored per match during that time is 3, with the number of goals averaged by MVV being 1.5.

Coming into this meeting, MVV are without a win away from home in their last 2 league matches.

Checking out their prior head to head meetings stretching back to 13/09/2019, it’s been all-even between these two clubs with Telstar winning 3 of those games, MVV 3 and 0 being draws after 90 minutes of play.

A combined sum of 17 goals were produced between them during those clashes, with 7 from Witte Leeuwen and 10 created by MVV. This gives an average number of goals per game equal to 2.83.

The last league match between these clubs was Eerste Divisie match day 22 on 14/01/2022 which finished with the scoreline of Telstar 2-1 MVV.

There is just one fitness concern for the Telstar manager Mike Snoei to be concerned with from a near full-strength set of players. Koen Blommestijn (Unknown Injury) won’t play.

In an otherwise healthy squad, there is only the one fitness worry for the MVV gaffer Maurice Verberne to be concerned about. Rico Zeegers (Foot surgery) won’t be in action.

When taking all factors into account, Telstar have it within them to get the win and a possible clean sheet when they play MVV, who might well find it difficult to score.

We’re therefore expecting to see a decent 2-0 winning margin for Telstar when the full-time whistle blows. 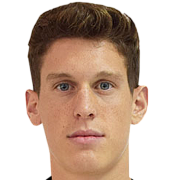 Mostly played in the Central Attacking Midfielder position, Christos Giousis was born in Greece. After having made a senior debut playing for AEK Athens in the 2017 - 2018 season, the goalscoring Midfielder has scored a sum of 3 league goals in this Eerste Divisie 2022 - 2023 campaign so far coming from a total of 15 appearances.

We have made these Telstar v MVV predictions for this match preview with the best intentions, but no profits are guaranteed. Please always gamble responsibly, only with money that you can afford to lose. We wish you the best of luck.