Reims head to Stade des Costières on Sunday for the Ligue 1 fixture with hosts Nîmes.

For all of our match predictions, pre-game poll and statistics for Nîmes v Reims, scroll down (plus the best game odds).

Nîmes will be looking to improve on their last outing here after a 2-1 Ligue 1 loss in their previous game against RC Lens.

In that game, Nîmes managed 57% possession and 15 shots on goal with 2 of them on target. The only player on the scoresheet for Nîmes was Zinedine Ferhat (52'). RC Lens got 7 attempts at goal with 4 of them on target. Ignatius Ganago (17') and Massadio Haïdara (76') scored for RC Lens.

It has been all too rare in recent games where Nîmes have shown defensive steel. In fact, Les Crocodiles have been scored against in 6 of their previous 6 clashes, letting in 8 goals along the way. That trend won’t necessarily be continued into this match, of course.

Looking at their past form shows that Nîmes:

Since a losing effort in their last game against Marseille in Ligue 1 action, Reims and their fans will hope to get a better result this time.

David Guion's Reims have managed to stick the ball in the net 5 times in the course of their most recent six matches. The total of goals that have been scored against them during the equivalent period adds up to 6.

Their past results show that Reims:

A glance at their past head to head clashes dating back to 11/05/2018 shows that Nîmes have won 3 of them & Reims 0, with the tally of drawn matches standing at 3.

In all, 10 goals were shared by the two clubs during those clashes, with 8 of them for Les Crocodiles and 2 netted by Les rouges et blancs. That’s an average goals per game figure of 1.67.

That time, Reims managed 71% possession and 16 attempts at goal with 6 of them on target.

Nîmes got 6 attempts on goal with 5 on target. Renaud Ripart (62') was the scorer.

Due to a completely healthy squad ready to go, Reims boss David Guion has zero fitness concerns at all coming into this game.

We feel that Reims are likely to score against this Nîmes side, although it is unlikely to be as many as they’ll concede.

We’re going for a 2-1 advantage for Nîmes by the time that the referee blows the final whistle. There shouldn’t be much in it, either way. 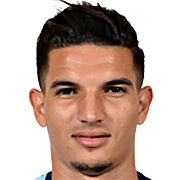 Mostly played in the Right Attacking Midfielder position, Zinedine Ferhat was born in Bordj Menaïel, Algeria. After having made a senior debut playing for USM Alger in the 2011 - 2012 season, the accomplished Midfielder has got 5 league goals in this Ligue 1 2020 - 2021 season to date in a total of 30 appearances.

While we have made these predictions for Nîmes v Reims for this match preview with the best of intentions, no profits are guaranteed. Always gamble responsibly, and with what you can afford to lose. Best of luck with your selections.