Pogon Szczecin will host away team Śląsk Wrocław at Stadion Miejski Floriana Krygiera in the Ekstraklasa fixture on Sunday.

Pogon Szczecin head into this game following a 0-0 Ekstraklasa stalemate versus Raków Częstochowa.

In that match, Pogon Szczecin managed 60% possession and 13 attempts on goal with 5 of them on target. Raków Częstochowa got 9 attempts at goal with 2 on target.

Their more recent scorelines shine a light on the fact that things are going according to plan in the Pogon Szczecin defence. Pogon Szczecin have been mean at the back, seeing the number of goals that have gone in at their end over the course of their previous six games standing at 3. Despite that, we’ll just have to find out whether such a trend will be sustained in this upcoming game or not.

Coming into this contest, Pogon Szczecin haven't been defeated in their previous 6 home league matches.

In their previous game, Śląsk Wrocław drew 2-2 in the Ekstraklasa match with Jagiellonia Białystok.

Demonstrating their bias toward fruitful encounters, we’ve had goals 27 times in the last six games in which Śląsk Wrocław have played, giving an average of 4.5 goals per fixture. Opposition teams have managed 13 of those goals.

Coming into this contest, Śląsk Wrocław have not won against Pogon Szczecin in games played away from home for the previous 4 league matches. Not the best of away records.

A glance at their past head to head clashes stretching back to 20/12/2018 shows us that Pogon Szczecin have won 2 of these & Śląsk Wrocław 1, with the tally of drawn games standing at 3.

13 goals were yielded between them in these games, with 7 of them from Pogoń and 6 for Śląsk. This gives an average number of goals per game equal to 2.17.

The last league match between these sides was Ekstraklasa match day 19 on 28/02/2021 and the score finished Śląsk Wrocław 2-1 Pogon Szczecin.

That time, Śląsk Wrocław managed 39% possession and 5 attempts at goal with 3 of them on target. Their only player on the scoresheet was Erik Expósito (44', 45').

Pogon Szczecin had 11 attempts at goal with 5 of them on target. Jakub Bartkowski (11') was the scorer.

The Pogon Szczecin boss Kosta Runjaić will be happy not to have any fitness worries at all before this game thanks to a completely injury-free group to pick from.

Thanks to a fully injury-free squad available for selection, the Śląsk Wrocław manager Jacek Magiera does not have any fitness worries to report coming into this clash.

We’re of the opinion that Śląsk Wrocław will likely be able to get a goal against this Pogon Szczecin side, however it isn’t expected to prevent them from conceding a couple at the other end.

We reckon that it will be a tight encounter finishing with a 2-1 victory for Pogon Szczecin at the end of the match. It’s a very tough call. 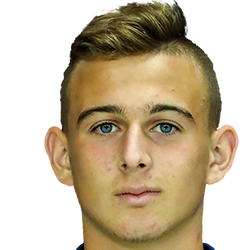 Usually deployed in the Centre Midfield position, Kacper Kozłowski was born in Poland. Having made a first senior appearance for Pogon Szczecin in the 2018 - 2019 season, the goalscoring Midfielder has scored 3 league goals in the Ekstraklasa 2021 - 2022 season so far in a total of 12 appearances.

We have made these Pogon Szczecin v Śląsk Wrocław predictions for this match preview with the best intentions, but no profits are guaranteed. Please always gamble responsibly, only with money that you can afford to lose. We wish you the best of luck.