View all of the Zagłębie Lubin v Radomiak Radom predictions, poll and stats below - as well as up-to-date odds.

Zagłębie Lubin will be hoping to return to winning ways here after the 2-1 Ekstraklasa loss in their previous game against Lechia Gdańsk.

Dariusz Żuraw's Zagłębie Lubin have scored a sum total of 6 times over their past six outings. The number of goals that have been scored against them in those fixtures stands at 8.

Radomiak Radom come into this match following a 1-0 Ekstraklasa win with the eclipse of Górnik Zabrze in their most recent fixture.

In that match, Radomiak Radom managed 43% possession and 12 shots on goal with 2 of them on target. The only player on the scoresheet for Radomiak Radom was Dawid Abramowicz (25'). At the other end, Górnik Zabrze got 12 shots at goal with 1 on target.

Going into this encounter, Radomiak Radom have not been beaten in their last 3 away league matches.

The Zagłębie Lubin boss Dariusz Żuraw has no fitness concerns whatsoever ahead of this match thanks to a completely injury-free squad to choose from.

Owing to a completely injury-free squad to pick from, the Radomiak Radom manager Dariusz Banasik has no fitness concerns to report coming into this game.

We’re of the opinion that Radomiak Radom and Zagłębie Lubin may both find scoring difficult here.

That’s why we have predicted a very competitive game with a 0-0 score by the conclusion of this game. 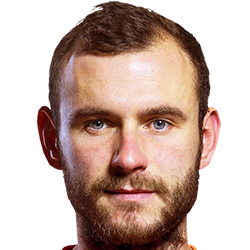 Usually taking up the Centre Midfield position, Filip Starzyński was born in Szczecin, Poland. Having made his senior debut playing for in the 2011 - 2012 season, the goalscoring Midfielder has contributed 2 league goals in this Ekstraklasa 2021 - 2022 season to date coming from a total of 13 appearances.

While we have made these predictions for Zagłębie Lubin v Radomiak Radom for this match preview with the best of intentions, no profits are guaranteed. Always gamble responsibly, and with what you can afford to lose. Good luck with your selections.