SønderjyskE will visit Ceres Park on Sunday for the Superliga meeting with hosts AGF Aarhus.

Our AGF Aarhus v SønderjyskE predictions, statistics and match poll can be seen below - as well as the best betting odds.

AGF Aarhus head into this game following on from a 0-0 Superliga drawn game versus Odense BK.

Their latest results really do illustrate the point that much respect should be given to the AGF Aarhus backline. De Hviie have been mean at the back, with the total number of goals that have gone past their goalkeeper over the course of their previous 6 clashes standing at 1. Such a trend might not follow through into this game, however.

Following on from a loss in their previous game against FC Copenhagen in Superliga competition, SønderjyskE will be aiming to make amends here.

The stats don’t lie, and SønderjyskE have been scored against in 6 of their last 6 matches, with opponents netting 8 goals in total. At the back, SønderjyskE seem to have a bit of a soft underbelly.

Coming into this fixture, SønderjyskE have left without a victory over AGF Aarhus when they've played them away from home in the last 3 matches in the league.

A review of their past head to head meetings going back to 15/02/2019 tells us that these fixtures have not been happy ones for SønderjyskE. They have not managed to come away with any wins whatsoever whereas AGF Aarhus have maintained the edge over them, finishing as winners in 67 per cent of those matches.

A total of 14 goals were yielded between them during those clashes, with 10 of them for De Hviie and 4 belonging to SønderjyskE. The average number of goals per game works out to 2.33.

The last league match featuring the two was Superliga match day 7 on 02/11/2020 and the score finished SønderjyskE 1-1 AGF Aarhus.

AGF Aarhus boss David Nielsen has zero fitness worries at all ahead of this clash with a completely healthy group available to choose from.

Thanks to a fully injury-free squad to choose from, SønderjyskE manager Glen Riddersholm has zero fitness concerns to speak of ahead of this match.

We feel that in this game, AGF Aarhus are likely to dominate possession and create several successful chances.

In contrast, SønderjyskE won’t find it easy to score themselves but we can see them scoring as well.

We can therefore see a decent 3-1 winning score for AGF Aarhus at the end of the 90 minutes. 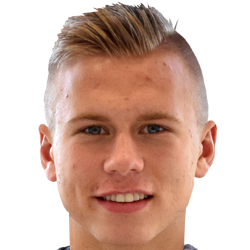 Regularly deployed in the Left Attacking Midfielder position, Jón Dagur Þorsteinsson was born in Reykjavík, Iceland. Having played his first senior match for Vendsyssel FF in the 2018 - 2019 season, the accomplished Midfielder has got 5 league goals in this Superliga 2020 - 2021 campaign so far in 16 appearances.

While we have made these predictions for AGF Aarhus v SønderjyskE for this match preview with the best of intentions, no profits are guaranteed. Always gamble responsibly, and with what you can afford to lose.