View all Alaves v Racing de Santander tips, stats and our pre-match poll below - as well as up-to-date odds.

Alaves will be hoping for a better result after the 0-1 Copa del Rey defeat in their last game at the hands of Sevilla.

In that game, Alaves had 47% possession and 15 attempts at goal with 3 of them on target. For their opponents, Sevilla had 7 shots on goal with 1 on target. Ivan Rakitić (48') was the scorer for Sevilla.

Alaves haven’t exactly had impressive attacking statistics of late. Their goals record stands at just 3 versus opponents during the course of their previous six fixtures. In those meetings, Alaves have also seen the tally of goals scored against them total 3. That kind of trend might not be carried forward into this match, of course.

Ahead of this clash, Alaves are unbeaten in the league by Racing de Santander in their previous 5 games.

Racing de Santander will go into the encounter after a 2-0 La Liga 2 win in the defeat of Sporting Gijón in their most recent game.

In the course of their 6 most recent matches, José Alberto López's Racing de Santander have converted a total of 7 times, yielding them a goals scored per game average of 1.17.

A look at their previous results shows us that Racing de Santander:

Inspecting their past head-to-head clashes stretching back to 09/02/2003 shows that Alaves have won 2 of these and Racing de Santander 1, with the tally of drawn matches being 3.

A combined sum of 16 goals were scored between the two sides throughout the course of those matches, with 8 for Babazorros and 8 created by Los Racinguistas. The average goals per game has been 2.67.

On that occasion, Racing de Santander had 41% possession and 7 shots on goal with 4 of them on target. Their only player to score was Arturo Molina (23').

The Alaves boss Luis García Plaza has zero fitness worries at all ahead of this match owing to a fully injury-free group available for selection.

With a fully healthy group available to select from, the Racing de Santander manager José Alberto López has no fitness concerns at all ahead of this clash.

Here, we’re thinking that Racing de Santander could find themselves struggling to breach the defence of this Alaves outfit who we think should manage to score & go ahead.

We’ve gone for a good battle with a 1-0 advantage for Alaves when all is said and done. 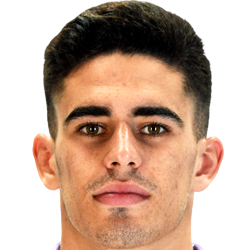 Generally used in the Striker position, Miguel de la Fuente was born in Tudela de Duero, Spain. After making a first senior appearance for Real Valladolid in the 2018 - 2019 season, the dangerous Forward has netted 4 league goals in this LaLiga2 2022 - 2023 campaign so far from a total of 22 appearances.

We have made these Alaves v Racing de Santander predictions for this match preview with the best intentions, but no profits are guaranteed. Please always gamble responsibly, only with money that you can afford to lose. Good luck!