Return to this page a few days before the scheduled game when this expired prediction will be updated with our full preview and tips for the next match between these teams.
Full-Time Result Prediction
👉
Havre AC to Win

Havre AC will be taking on visiting team Annecy FC at Stade Océane in the Ligue 2 tie on Saturday.

Our predictions, user poll and statistics for Havre AC v Annecy FC can be found here - as well as up-to-date odds.

Havre AC, buoyed by their previous result, will be hoping for more of the same after the 0-1 Ligue 2 triumph over Niort.

The only player to score from Havre AC was Victor Lekhal (54').

Their latest results show that much solidity has been shown by the Havre AC backline. Havre AC have been stingy, resulting in the tally of goals that have flown into the back of their net over the course of their previous 6 outings standing at 4.

Annecy FC will come into the match following on from a 1-0 Ligue 2 win with the defeat of Quevilly-Rouen in their last game.

The only scorer from Annecy FC was Alexy Bosetti (74').

A succession of effective performances by the Annecy FC defensive players has resulted in their ‘goals against’ tally standing at 3 from their past 6 fixtures overall. Over that same period, their own forwards have managed to score 5. We will find out if that trend will be sustained here.

Coming into this clash, Annecy FC haven't been defeated in their previous 3 away league matches.

There aren’t many personnel worries, with just the lone fitness concern for the Havre AC gaffer Luka Elsner to be concerned with from an otherwise fully-primed group of players. Abdelwahed Wahib (Cruciate Ligament Rupture) is out of contention.

Due to a fully injury-free squad available to choose from, the Annecy FC manager Laurent Guyot doesn’t have any fitness concerns whatsoever coming into this match.

We’ve got the feeling that Annecy FC will manage to breach the defence of this Havre AC side, however it probably won’t quite prevent them from conceding a couple at the other end.

We’re going for a very close game with a 2-1 victory for Havre AC after 90 minutes. Definitely a tough call. 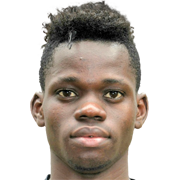 Generally deployed in the Striker position, Jamal Thiaré was born in Senegal. After having made a senior debut playing for Charleroi in the 2013 - 2014 season, the goalscoring Forward has contributed 3 league goals in the Ligue 2 2022 - 2023 season so far in 7 appearances.

While we have made these predictions for Havre AC v Annecy FC for this match preview with the best of intentions, no profits are guaranteed. Always gamble responsibly, and with what you can afford to lose.