Scroll down for all of our predictions, poll and stats for the Vélez Sarsfield v Arsenal de Sarandí game (including the best match odds).

Mauricio Pellegrino's Vélez Sarsfield have netted a sum total of 13 times over their past 6 outings. The comparative tally of goals that have been scored against them in that same time amounts to 6.

A look at their previous results shows us that Vélez Sarsfield:

Over the course of 6 of the past six clashes featuring Arsenal de Sarandí, a notably low volume of goals have gone in between them and opposing teams. The overall average number of goals per game in that period comes out as a mere 0.5, with the average goals for Los del Viaducto being 0.17.

Ahead of this clash, Arsenal de Sarandí are without a win away from home in their last 10 league matches. It's not a good run at all.

Looking at their most recent head to head clashes stretching back to 16/08/2014 tells us that Vélez Sarsfield have won 3 of these games and Arsenal de Sarandí 2, with the number of drawn results standing at 1.

A sum of 16 goals were scored between them during those clashes, with 10 for El Fortín and 6 being from Los del Viaducto. The average goals per game has been 2.67.

The previous league clash featuring the two was Superliga match day 21 on 23/02/2020 when the final score was Arsenal de Sarandí 0-4 Vélez Sarsfield.

On that day, Arsenal de Sarandí had 49% possession and 12 shots on goal with 1 of them on target.

The match was refereed by Mauro Vigliano.

The Vélez Sarsfield boss Mauricio Pellegrino has no fitness concerns whatsoever ahead of this game thanks to a fully healthy squad ready to go.

Thanks to a fully injury-free squad ready to go, the Arsenal de Sarandí manager Sergio Rondina has zero fitness concerns to speak of before this game.

In this game, Vélez Sarsfield will more than likely score at least once when they face Arsenal de Sarandí, who will be up against it to score.

Our selection here is for a pretty comfortable 2-0 winning margin for Vélez Sarsfield when all’s said and done. 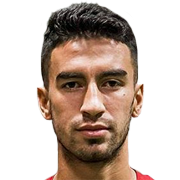 Mostly taking up the Striker position, Juan Lucero was born in Junín, Argentina. After having played his first senior match for Independiente in the 2014 season, the talented Forward has managed to score 5 league goals in the Superliga 2021 season so far in 15 appearances.

While we have made these predictions for Vélez Sarsfield v Arsenal de Sarandí for this match preview with the best of intentions, no profits are guaranteed. Always gamble responsibly, and with what you can afford to lose. Good luck with your selections.